When I checked my cell phone at 8 AM, I noticed a missed call and a voice message time stamped 2:18 AM. The caller was Andre’s night-shift nurse, Ken, and his message was that Andre was adamantly asking for me. Ken’s phone call did not wake me up because I had inadvertently left my phone on vibrate. Imagine how my heart had felt when I heard that message. It broke my heart to hear that he wanted me and I wasn’t there. So after listening to the message, I hurried to the hospital.

When I got here at UW hospital this morning, he was as awake as one can be with the painkiller and the sedative on tap. I communicated with him by asking him questions that required only a yes-or-no answer. But he gestured that he wanted to write down something. After 5 minutes of illegible writing, I told him to just relax which he did.

Half-an-hour later, Andre’s oncology doc and PA came in the room for their morning rounds. As they were talking to him, he started gesturing that he wants to write something. So I took the dry-erase board off the wall and gave Andre a marker. I thought he was going to write down what he wanted to say to his doctor–whether he was in pain, nauseous, cold, hot, or something else. Instead he wrote down “I LOVE U” and started pointing at me. My heart just melted and my knees went weak. I had to hold back my tears since I didn’t want the other people in the room to witness my crying. Below is Andre’s first gift of the day (pardon my lack of picture-taking skill). 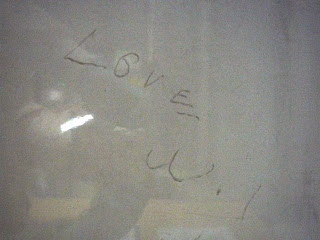 Andre’s second gift was to the daytime nurse. He gave her the middle finger when she was being pushy (she was really just doing her job). That’s my Andre!