This is what you get for wanting brightness.  There’s nothing like SNOW for reflecting the light!

I reached the most pertinent chapter of Names for the Sea, entitled “Knitting and Shame”.  It turns out that the author loves crochet.  And in her final month in Iceland she discovered knitting.  Don’t you just want to rewind time and introduce her to the wonders of wool a year earlier? 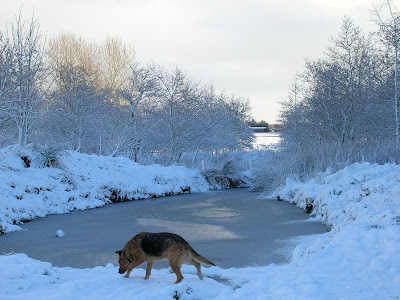 She returns to Iceland as a tourist and everything looks much much better.  And I wonder if that’s the way it is.  You don’t see what’s good about a place when you are absorbed in the day to day.  She can finally enjoy the coffee houses she couldn’t afford to frequent when she lived there.
There is a lesson for me here.  Carpe diem springs to mind.

I WILL go to Iceland one day!  Especially now I know you can get there from Glasgow (thanks to those who pointed this out!)

Meantime…I’m having another hissy fit at the state of my house.

We had the builders in over the past two weeks.  They were re-pointing the two gable walls to try to stop the water gushing down the inside of the chimneys when it rains.  This is the third set of builders to have a go at the job.
The first lot (2005) took off the harling and did a half-hearted job, resulting in a patchwork mixture of lime mortar and cement.  If you have ever watched Grand Designs, you will know this doesn’t work:  it drives all the water through the limed sections and into the house.  That was the year of the buckets and mop and the end of my bedroom carpet.
The second builder (2007) recommended picking it all out and starting again but FL refused on the grounds of expense, so instead they tried spraying the walls with a waterproofing solution.  Which worked unless the rain was coming from the East… or the West.

So here we are again, several £k lighter, with freshly repointed walls.  100% cement.  I would have preferred lime, but apparently you require a conservation-quality builder for that, not a guy you met in Wetherspoons.  Watch this space.

While I understand that other people have greater problems than mine (proper deep floods spring to mind), I have lived with 2 weeks of cement puddles on the bathroom floor and sand in the bathtub (the nearest source of water) and muddy footprints from one end of the house to the other…  alongside the usual dog hair and autumnal leaves.  And we ran out of milk every day due to the endless mugs of tea. And there was no hot water because the builders drained the tank before I got home.
And then the boiler broke.
Now we have no hot water at all unless we boil a kettle, but luckily the shower heats its own water.  The electrician is coming back next week “sometime”.  He thinks that mice have chewed through the cable (again).
But all this rubbish has been getting me down.  Which explains my knitting productivity rate going through the roof.
I just want to be clean and tidy! So yesterday I scrubbed the floor with kettles-full of water.  Hoorah!

And then it snowed.  Shrugs. 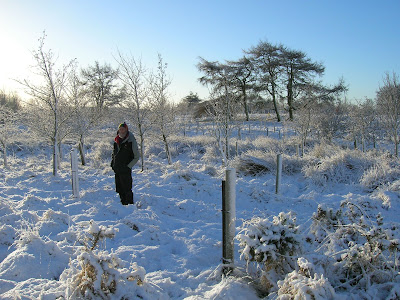 And now it is December.

Almost time for lists and planning for 2013.

I have been keeping an account of all my purchases in 2012 and the results are very interesting.  I will be doing a separate post on that nearer the end of the year, when I am sure I have captured a full 12 months.
But this much is clear:

And something else?  For someone who is supposed to have given up buying clothes, my “shop-bought” expenditure still matched my spending on sewing patterns (and that included a couple of splurges on ebay).

Serious thought required.  What are my priorities?