Skip to content
This week we will be discussing cardiac staging of AL (light chain) amyloidosis. As mentioned in this post from February 4th, 2018, we are used to the idea of staging AL amyloidosis on the basis of baseline cardiac biomarker measurements. The most widely used system is the European modification of the original 3-stage Mayo 2004 system which uses Troponin T or I and NT-pro-BNP to divide patients into Stages 1, 2, 3a and 3b. The Mayo 2012 system, which incorporates serum free light chain levels, is another 4-stage variation on this theme. Finally, there is a British cardiac staging system for transthyretin (ATTR) amyloidosis which was the subject of a prior #amyloidosisJC discussion. What all of these publications have in common is the use of NT-pro-BNP as a key cardiac biomarker. What all medical centers don’t have in common is the ability to order this test without having to send out a blood sample. Many centers use BNP as an alternative. In this installment of #amyloidosisJC, we examine a new 4-stage cardiac staging system for AL amyloidosis devised by researchers at Boston University which incorporates BNP rather than NT-pro-BNP (and we will be lucky enough to have them lead the Twitter discussion!)

Here is a Visual Abstract from the journal Blood summarizing the article:

Key Details of the article we will be reviewing: 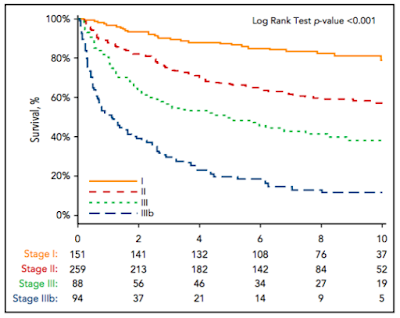 Please join us at 9 pm on Wednesday, March 27th, 2019 on Twitter (find us at #amyloidosisJC) for a full and spirited discussion of this article, as well as the other AL cardiac staging papers cited above!