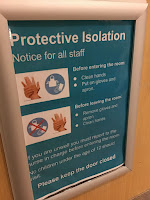 While I feel good enough to write, here’s an update. I’ve been in “protective isolation” for 3 days now. The upside is that I’ve already seen 3 World Cup rugby matches. They tend to wake me a little before 6 to do blood tests and the games (because of the time difference between London and Japan) are all between 5am and 1pm. Perfect. Telly is about the extent of my ambition. I even enjoyed an episode of Top of the Pops from 1988, on some random channel-hop (and indulged my inner nerd by watching the proroguement case from the Supreme Court).

The downsides are best glossed over: a lot of nausea, a very fluid relationship with the bathroom, a temperature  spike…

But I knew before I got here what this part of the process entails. The aim is simply to be alive at the end, and rely on the fact that horror dims in the memory. Prior experience is proving unhelpful – I have another perspective, when maybe less awareness would be better. At one point, sitting on the toilet, my brain volunteered that, at the current rate, I could have 1,000 toilet trips, before they let me out. That thought didn’t make anything better. (Things have calmed down since… maybe I’ll only sit on the throne 200 times!) So, I’m trying hard not to overthink. Just to let the time pass.

My neutrophils are at zero, so the next milestone will be when there’s any evidence of them returning. That will be “engraftment”, and indicate that I am beginning to recover. That’s probably a few days away yet, but hopefully not as much as a week.