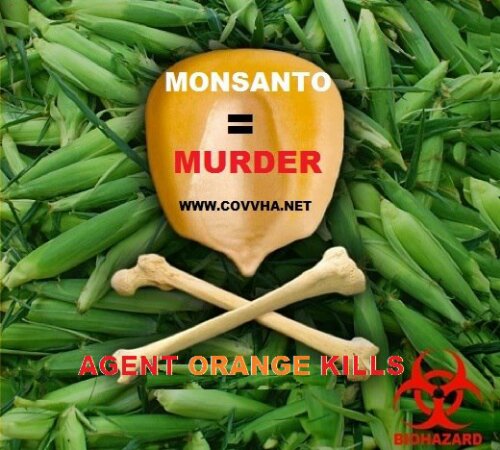 For 50 years, Monsanto and 6 other chemical companies have gotten away with murder. The weapon used, most predominantly during the Vietnam War, was Agent Orange, second only to radioactive waste. During the Vietnam War era, Monsanto produced agent orange at 1,000 times greater the potency vs. the other 6 companies. Hundreds of thousands globally have died including members of Children Of Vietnam Veterans Health Alliance and will continue to die drastically before the average human lifespan.

Today, half of Agent Orange’s chemical compound, 2, 4,-D, and other pesticides like roundup, are the chemicals being sprayed on GMO (genetically modified organism) crops, resulting in triple the danger of food that is not organic.  Imagine what happens to a body already exposed to agent orange like myself, Truth Teller, that consumes these GMO pesticides and foods.  In a nutshell, Agent Orange was, in essence, the chicken before the GMO egg.

As I said before,  for the last 50 years, Monsanto has gotten away with this crime.  If there is no unity between organizations fighting for Agent Orange justice and those fighting for the labeling & banning of GMO’s, how many more years do you think it will take before you see a change?  The answer, can simply be only one…. TOO MANY.

This is a call for ALL to educate themselves, others, & those that fight against us to UNITE.  My only question left to ask now is, are YOU in or are you out?