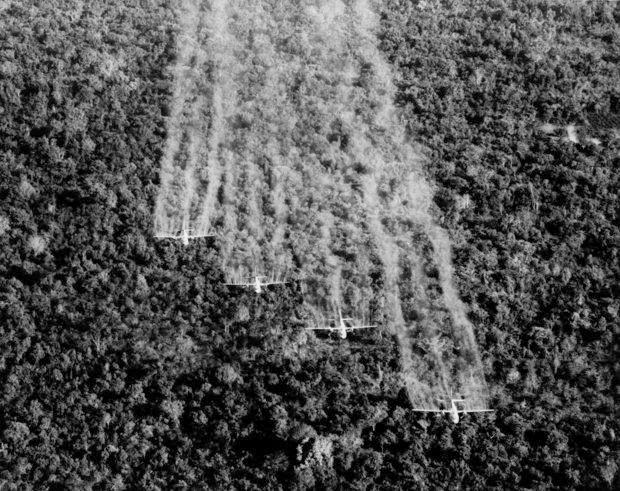 FILE – This September 1965 file photo provided by the U.S. Air Force, shows four “Ranch Hand” C-123 aircraft spraying liquid defoliant on a suspected Viet Cong position in South Vietnam. During the Vietnam War, Air Force C-123 planes sprayed millions of gallons of herbicides over the jungles of Southeast Asia to destroy enemy crops and tree cover. The military stopped the spraying by early 1971, but some Air Force Reserve units continued to fly the former spray planes until the early 1980s. Some veterans who flew in those planes after the war have been getting sick, and like many Vietnam veterans, they’re blaming the herbicides they say still coated the planes for decades. Their crusade has been led by a former Oregon resident and Air Force veteran. (AP Photo/U.S. Air Force, file) (Anonymous)

The powerful herbicide was used to defoliate forests, a hiding place for the Viet Cong, as well as a food source.

In the aftermath of the war, millions of veterans faced profound and debilitating medical complications as a result of exposure with the toxic substance. And even though in 1991 the government established broad and full compensation for veterans who had “boots on the ground,” millions of others have continued to struggle to secure compensation for their medical needs as a result of Agent Orange.

PennLive is looking for veterans who may have been exposed to Agent Orange, whether or not they deal with health complications as a result. We are also looking for relatives of men and women who may were exposed to the defoliant.

If your father or grandfather – or even uncle or cousin or good friend – was a veteran who was exposed to the toxin, we would love to hear your story.

Share your story by filling out the form below, emailing us at submissions@pennlive.com or writing in the comments section below.

We will keep your story confidential unless you tell us you want to share it with others.

Are you dealing with the effects of Agent Orange?