Skip to content
When the Haematology doctor came to see FL today, it was the first time he had been seen by someone who knew him and understood how far his condition has deteriorated in an alarmingly short time.  He brightened up when we woke him to see a familiar face, someone who might be able to help.
This doctor was firmly of the opinion that he doesn’t have a chest infection at all, “just” excessive fluid built up in his chest.  She bumped up his dose of diuretic tablets and suggested reducing his morphine levels to get him awake and mobile again.  His legs are badly swollen, so he is going to get some help from a physiotherapist.  I mentioned a blood transfusion, and she agreed it would be good to get that done while he is in hospital, sooner rather than later.
She promised to do all she can to get him on to the specialist ward:  the beds are currently all taken up by chemotherapy patients.
When they brought his lunch, I sought refuge in the cafe attached to the medical school and made use of work’s free wifi to catch up on emails. When I returned, he was asleep on the table, lunch abandoned and pills ignored.  I spent the next half hour trying to wake him to take the pills and sip some water.
I decided to go to work for the rest of the afternoon.  I needed to make sure I had left clear instructions for someone else to cover the essentials if I can’t be there.
Back home, the farm was doing a good impression of Wuthering Heights and I had a bit of a meltdown.  Oh dear, Roo!

I was rescued by a phone call from my son, who works in a call centre.  He was cursing the Norse gods for cancer and I sobbed that I was worried his boss would hear him.  He thought that was hilarious, as he was in the corridor on his mobile:  if he had been on a work line, his language would automatically have set off red flashing lights and an alarm on his supervisor’s monitor and he would have been hauled out of the room!  What a marvelous system – we should have the same in my workplace!
I had a second call from one of FL’s golf pals who visited him this evening.  He had been much more alert and managed to walk to the toilet with a nurse, attempting a waltz!?!
Wow.  Just wow.
I can sleep more easily now.  And I hope not to wake at 4am, expecting to give FL his pills… 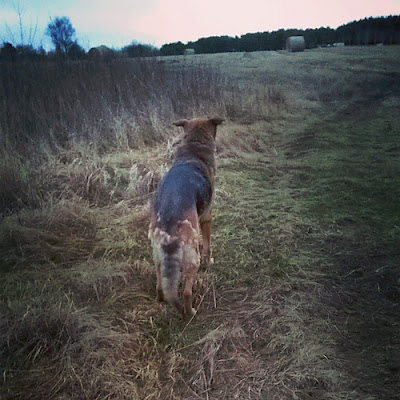 PS Hero accepts your congratulations for exceptional bladder control :)
Continue sock A by knitting 9 rounds. Today’s theme is runes. For those of you doing colorwork, you can find below charts that you can use to write your own name or at least something close to it. Since runes have been used, among others, by vikings, today’s color comes from vikings as well. In viking mythology, there is the rainbow bridge of Bifrost that was made from fire (=red), air (=blue) and water (=green). So, choose your color based on which element you feel is closest to your personality.
Oh, you know me, I can’t just make a decision that easily!
I decided to look up the meaning / element of the runes which would spell “Roo”to see if that gave me a single answer.

Wow!
That feels like a message from my son’s Norse gods.
As my last stripe was the colour of Earth, I chose the colour of Air, blue. 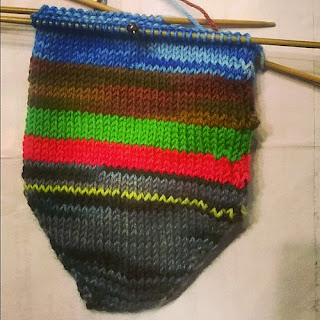