Skip to content
FL woke at 2.30am in agony.  I gave him a top up morphine pill that saw him through to 5am when I managed to get him up.  He then slept bent over the kitchen table – the most comfortable position for a Myeloma sufferer, I am told.
This morning I managed to arrange a house call from his GP.  She is going to talk to the hospital about a short stay in the local hospice to get his pain under control, as he is suffering to an unacceptable level.  She also took a blood sample to check his white and red cell counts, in case he needs a blood transfusion sooner rather than later.

I administered half a satsuma and a tin of ravioli.  No point in having a battle over broccoli when he doesn’t want to eat at all. 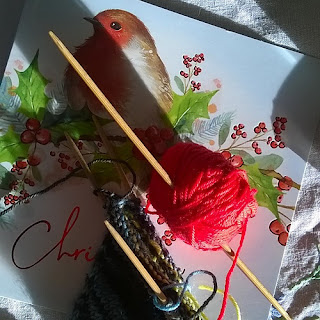 Continue sock A by knitting 4 rounds with a color determined by the year you joined Ravelry.

I worked 4 rows of grey first, in attempt to even up my two socks.  Simple arithmetic is beyond me today, so I can’t tell if this is going to work or not.

Thank you so much for all your kind words and cheer-leading.
There isn’t anything anyone can do.  But thank you for asking :)