Today was unexpectedly stressful.
Having developed a plan for FL’s release (and yes, it has started to feel like a penitentiary in that ward) I thought that this day would be a calm one.
I said goodbye to work for the year – hooray!
My dear friend Christine was up from Glasgow and we met for lunch – hooray!
And then I went to the hospital.
FL was fast asleep, lying down.  It has been weeks since he was last able to lie flat without coughing, so hooray again!
When he woke, he said he had a day of disturbances:  the Occupational Therapist had been to check if he needed adaptations at home and he had said no; there had been blood tests; there had been lunch, just at the point when he most wanted to sleep.
But there had been no sign of a doctor, a physiotherapist, or social services.
I settled in with my knitting and he dozed beside me.
I was just thinking it was time to head home before the rush hour, when the ward doctor arrived. “Would FL like to go home?”
Um… sorry?!
“Well there is no point in him being in hospital when he is well enough to go home, so why doesn’t he go home – he can go NOW if he wants!”
I was taken by surprise.  I explained that the MacMillan nurse was working on a plan for help at home and for the management of future care at the community hospital, but that nothing was in place yet and I had thought we were aiming to go home early next week…?
“Well, tomorrow then.  How about tomorrow?”
FL thought this sounded like a good idea.  And seeing the hope in his eyes, I could not bear to be the obstacle to him getting home, so I agreed.
As soon as the doctor left, I went into panic mode.  I went to see the staff nurse to ask about the social services referral.  Nothing had been done yet.  She said she did not understand what help I thought I needed:  if we had managed before FL came into hospital, why would we not manage now?  He had told her he was fine and didn’t need any help at home.
FFS.
So I emailed the MacMillan nurse from my phone, hoping against hope that he might still be on duty.
FL was waiting for me, all set to go home there and then.  Quite apart from anything else, I knew we didn’t have enough morphine to last until the GP’s surgery opened again on Monday.  FL said he would manage.  Ridiculous!
I was just trying to explain the very many reasons why we needed not to leave hospital there and then when the MacMillan nurse appeared, with the staff nurse at his side.
The relief!  I cannot tell you how pleased I was to see him.
He listened to my concerns and to FL’s plea for release.  The staff nurse had just then made a referral to social services and we were told he would be assessed in 7 to 14 days, but that this could be done at home.  7 to 14 days?!  That was the clincher.  There is no way I could have FL spend another 2 weeks in that place when his weeks are limited!
The MacMillan nurse could sense my panic and saw the pressure I was under to agree to FL going home.  He asked what he could do to help me.  I explained I did not know who to call upon if we needed help, particularly at the weekend.  What was the plan for his future blood tests / review / support?  It was just all too fast, there were too many uncertainties.
So he suggested making an immediate referral to the district nurse service, to have someone come in on Monday to make sure we were coping, and to check FL’s blood count as a medical justification for the visit.  He said that if we were having problems, the district nurse would be able to help hurry along social services – brilliant!
Once again, MacMillan to the rescue!
It was agreed that FL can come home tomorrow, with a big bag of drugs.
FL is still mystified by my insistence that we need help.  As far as he is concerned we were doing fine on our own until now and will continue to do so.
But something has changed in my mind.  Before he went into hospital, FL was the same man I always knew, the man who has lived with a cancer diagnosis for over 8 years, for better and for worse.
But now?  Now he is “terminally ill”.  I feel the weight of a terrible responsibility to care for a dying man in his final days / weeks / months and I really don’t know how to do that.
I don’t know how to look after us.
There comes a point where “us” is not enough.
Thank goodness for MacMillan! 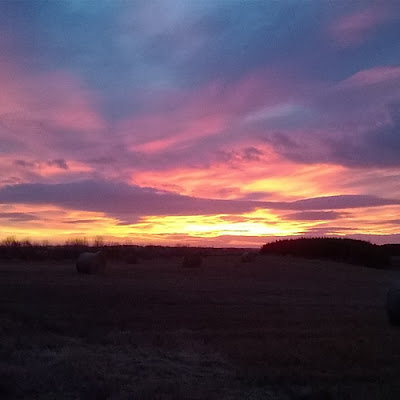 Let’s turn back to sock B. Pick the colour according to the colour of the day in Thai tradition. If you don’t know the day of your birthday, use e.g. this calculator.

I was born on a Friday, which is Light Blue.  18 rows.  Off I go…
A picture will have to follow tomorrow.
Have this morning’s sunrise instead!