A frustrating time at the hospital today.  FL said he had been taken for “a heart test” at the time when his breakfast was delivered, so he didn’t get to eat.  He doesn’t know what sort of test it was, or why he was having it.
He had just been taken back to the ward, and started to try to get dressed for the day, when another porter turned up to take him for radiotherapy.
I have always listened and spoken for him at radiotherapy as he doesn’t understand what it is all about and can’t hear them properly. Without me, he was lost, and told the doctor his only pain was from shingles.  She said radiotherapy would not help that, so sent him back to the ward without any treatment.
I am really really angry about this.
He was still in his pyjamas when I got there at 1pm.  He was exhausted and knocked over his jug of water when he saw me.  He called for an extra painkiller then fell asleep halfway through his lunch and slept until 3.30, when he called for another painkiller.
The nurse who came with it started asking about him going home.  She wanted to know who I was and I said I was his wife.  “Oh – and how long have you been married?”  She didn’t ask in a nice way – I felt like I was being accused of being some sort of a floozy, picking up a sick old man.  I said “eleven years.”  I don’t think she believed me.  It has only been 8 “married” years but we have lived together for 11.  And what does it matter anyway?  Even if it had only been 5 minutes, we are not trying to cheat the NHS out of a bed space!
I said I work full time and he will need support to be at home.  She said something vague about Social Services, but I don’t trust her to do anything.
So tomorrow I have made an appointment to see the Macmillan nurse to get some proper help, support and truth.  Not to mention Radiotherapy.
I left FL sleeping again.  I have taken him the Kex blanket I knitted.  At least I can be sure he will be warm tonight.

Let’s continue and knit 15 rows to sock B. Choose the colour of the day from a childhood favourite book and choose the pattern as you like. 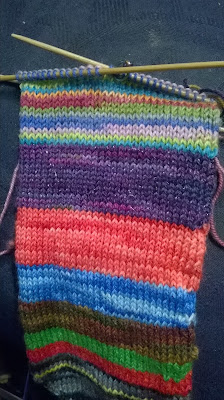 It is a symptom of my own tiredness that today I picked up the wrong sock and knitted 15 rows on it.

It doesn’t really matter.  As long as I remember to make them both the same length by the end!

I instantly thought of Pippi Longstocking, and used yarn left from my own pair of long stockings :) 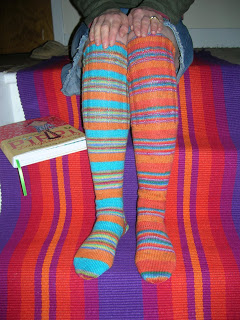