FL was just finishing his lunch when I arrived to visit today.  He had eaten nearly everything and was still awake.
He was much more alert than yesterday and able to concentrate on reading and conversation. What a difference!
The haematology doctor came to see him at about 3pm.
She explained that they are still waiting for an appointment for radiotherapy to his sternum and would prefer he has this before he goes home. They are also keen for him to have some physiotherapy, but it is harder to arrange on the general ward than in Haematology, where there are still no beds available.
He said he really wants to go home asap.
I became quite anxious that he would get himself discharged without having any support arranged in the community.  I would be so worried to leave him home alone for an 9 hour working day, not knowing if he was warm enough / able to feed himself / steady enough on his feet to get around the house.
Poor FL thought I was refusing to have him home again and took some convincing that I was simply concerned for his basic health and safety.  The doctor understood what I was saying and asked FL to think about his new “base level” – it is lower than before and is likely to deteriorate from this point forward:  how much better it would be to have support in place now, before it becomes critical!
She explained that once he goes home it will be harder to access the initial assessment for support.  If the process can be started while he is in hospital it is likely to be quicker, as the hospital needs the bed and will put pressure on Social Services to assist.
All he really needs just now is to have someone look in on him at lunchtime on the days when I am at work, to check he gets some food, is drinking, and has enough heat.  But without that level of reassurance, I would be afraid to work full time.
He is not pleased.

Let’s continue with sock B. Choose the colour of the day from a place you have wanted to visit.

I would love to visit Iceland.  I decided to google “Iceland knitting”and use the colour of the first image that came up: 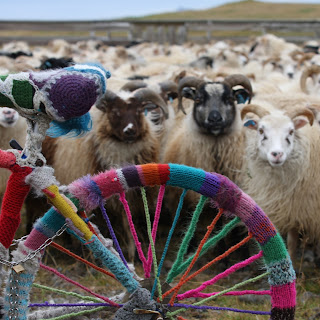 Which pretty much left all options open to me!
A sheepy colour?  A rainbow variegated?
And then I thought about what I would like to see on a visit to Iceland and one of my answers was the Northern Lights.  So I unearthed the remains of a skein of Fleece Artist Sock in the colour “Cosmic Dawn”:  perfect!  I love it so much! 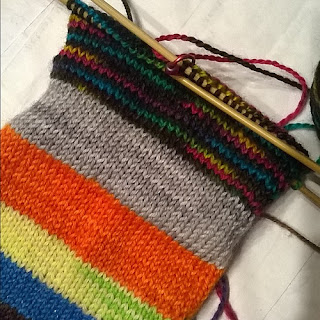