An astonishing thing happened this morning.
I was sitting at home with my toast and coffee, a mournful-eyed dog at my elbow, when my mobile phone started to ring…
It was FL!
Only yesterday he could not hold the phone steady for long enough to find a number, let alone stay awake long enough to hold a conversation.
Why the change?  Last night they gave him a bag of blood AT LAST.
He didn’t say much, but he was able to be in touch.
Wow!
Just wow.
When I arrived at the hospital, he was asleep, but it was easy to wake him and he was able to hold a short conversation.
He said they had intended to give him two bags but something went wrong with his port and they had to cancel the second.

He managed to eat a pear (I must buy more!) and settled down with the newspaper while I knitted my sock.  It felt… almost normal.
When lunch arrived, he made a valiant attack on it, but fell asleep halfway through.
I sneaked out to get myself a coffee.
When I came back, they were just hooking him up for the second bag of blood.
I could see from the monitor that his blood pressure is alarmingly low:  they checked it every 15 minutes, which was reassuring.
The transfusion was only halfway done at 4pm and I needed to get back to the dog. I woke him to say I’d be back tomorrow morning.
He rang me again just now – it took until 8pm to finish bag two and he said they were still watching his blood pressure.
I have no illusions: this is a temporary fix.
But how lovely to have him back in the present for a little while longer! 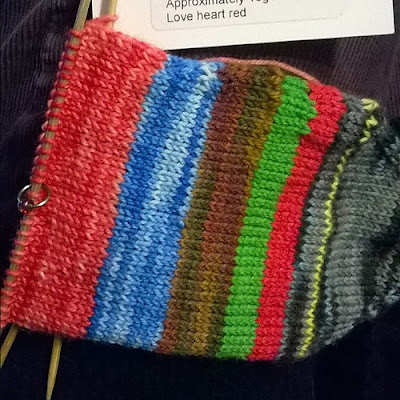 Saturday night is lottery night in Finland so let your color of the day be decided by the lottery and continue sock A by knitting 12 rounds in this color. Choose from your scrap yarns for example six nice colors and decide beforehand which color represent which numbers. Then let the first lottery number determine the color. If you don’t have national lottery on Saturdays in your country, you can check the Finnish lottery numbers here.

The problem with this clue was two-fold:  (1) I didn’t expect still to be awake when the Finnish lottery results were announced, and (2) I can’t abide the shouty UK Lottery TV programme.  I think I have only bought a lottery ticket once in my life (I didn’t win).
So I did it my own way and had a “Lucky Dip” in my scrap yarn bin instead.

And the winner is….
12 rows of a Knitting Goddess sample in Love Heart Red – perfect for transfusion day!