This advent countdown has taken on a whole new layer of meaning for me.  This was never supposed to be a misery memoir, but I need to get it out and the blog has been my journal of choice for all these years, so… it is what it is.  If it is too much for you, I understand and won’t hold it against you if you need to stop reading and come back in happier times.

I got to the hospital at 11-ish, after a long walk with the dog, who is clearly in need of extra support right now.  He raided the recycling bin while I was out yesterday!
FL was asleep in his chair, so I took up residence with my sparkly sock. 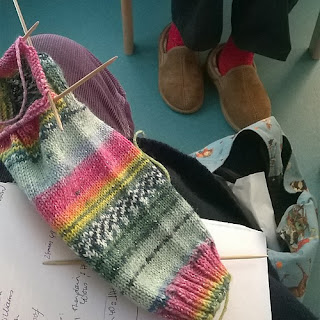 He woke soon after and we had a surprisingly lucid conversation for maybe 15 minutes, before he subsided again.  He is now the reluctant owner of a zimmer frame and is not amused by it.  But at least it means he now has a chance of getting to the toilet in time.  I witnessed another patient press his buzzer and wait almost half an hour to get some attention.
Lots more sleeping.
Then lunch.
I woke him to take his soup, but the fish defeated him.
I made a declaration of intent, and set off to find someone who could tell me what was planned. Because nothing has happened yet, other than monitoring and waiting.  And more waiting.
By chance, I met the haematology doctor by the lift.  She told me that the consultant was definitely coming to see FL today, probably around 3pm. I caught her off guard and without thinking she said “He is looking terrible!”  Um, yes.
Back on the ward, I managed to treat FLto some sliced pear and made him smile with the offer of a “finger of Fudge”, a children’s treat.  He didn’t fancy it, but the smile was lovely to see.
So at 4pm the consultant came.  He woke up and was pleased to see her.  He said he knew things were bad when he started to get paranoid and confused.  That is the first time he has admitted that.
She told him he needs to stay in hospital so they can keep an eye on him day to day, hopefully in the Haematology ward as soon as a bed becomes available.  A blood transfusion is still planned.  He can’t go home until he can move around safely:  a physio needs to do some work with him.
In a quieter tone she said to me: “I think we have to accept that this is the way things are.  His myeloma has increased and he is increasingly frail.”
Which is probably the closest she will ever come to telling me the whole truth. 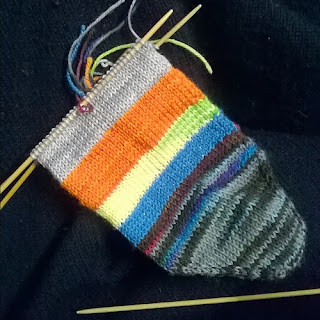 Let’s continue with sock B by knitting 11 rounds. The colour of the day is determined by your blood type.

HAHAHAHA hysterical Haematological socks!
And I don’t have a clue what my blood type is.
So grey it is.