Blogging from phone and cant seem to add photos. Will edit later.  Now with pictures :)

FL was pretty much the same today as yesterday, but rather lower  in mood.  He doesn’t understand why he is in hospital if they are not going to do anything to help him.
His chest is still gurgling.  His legs are slightly less swollen.  He is still in pain.  He still sleeps more than he wakes.
When I arrived he was sitting on the edge of the bed, keeling over to one side as he drifted in and out of sleep.  He thought he had had an “accident” but had not told anyone.  I alerted a nurse and he was walked unsteadily through to the toilet.  When they returned, she said there had been nothing wrong.
The man in the next bed said he thought FL had accidentally flushed before standing up and that this had upset him.
It breaks my heart to see him so unhappy.
I asked to see the doctor, and when he came he explained that they are really just providing FL with a bed while they wait for haematology to “do something”.  A blood transfusion has been mentioned but there is no word of when it will happen.
There is still no room on the haematology ward for him.  I have realised that he probably no longer fits their criteria.  He is not on super-drug any more, so is not of special scientific interest.
He is to all intents and purposes just one more not-very-well confused old man among many, with no chance of dignity or personalised care.
The sign on the toilet wall says it must be checked for cleanliness every two hours.  The last signature was dated two days ago.  It is obvious they are under-staffed.
Tomorrow I intend to spend the whole day with him, if that is what it takes to ensure he is properly fed, washed and helped to the toilet when he needs to go.
Because this is what it has come to.
I want my FL back.

For the life of me I could not think of a game, other than the Dr Seuss Green Eggs and Ham board game which I used to play with the kids when they were small.  Maybe I was still thinking about that soup from the other day!  I couldn’t go for green again, so opted for orange.

Orange had additional meaning today because I also wore my orange Angelus Novus cardigan for the first time, to brighten up the hospital.

I hope to give it a blog post of its own one day, but for now let me just tell you that I love it :)
It is soft and warm and comfortable and the colour and shape are so striking, even without blocking.
I know it will look better after a soak and a press, but I wanted FL to see it as soon as it was finished. 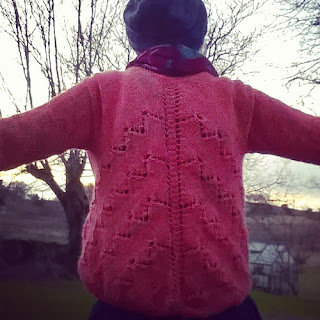 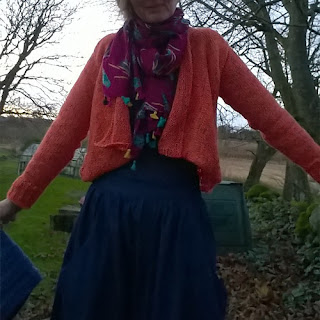 My cardigan is an exact copy of Ms Wool Kitchen’s own test knit of this pattern.  I saw it on Instagram and had to have it.
And now I do.  Woo hoo!