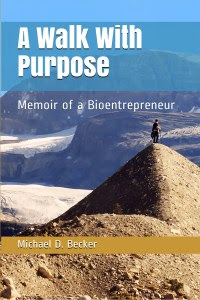 With a prolific career in biotechnology, serving as CEO of two companies who worked in the treatment and diagnosis of cancer, Michael Becker knew and understood cancer. It was his job. So, when he was looking in the mirror at age 47 and saw a lump in his neck that wasn’t there the day before, he knew something was wrong. After several tests and agonizing waiting periods for results, his worst fears were confirmed – he was diagnosed with stage IV oropharyngeal (head and neck) cancer in December 2015. While initial treatment appeared successful, his cancer returned in December 2016 and he was given about a year to live.


What does someone do with a diagnosis like that? Everyone would react different. For Becker, he became determined to share his story of adversity and daily triumph, which is all chronicled in his new non-fiction autobiographical book, A Walk With Purpose: Memoir of a Bioentrepreneur. Part memoir, part fascinating look inside the biotechnology industry, A Walk With Purpose takes readers down his career path from an investment advisor to chief executive officer of an oncology-focused biotechnology company, to finally ending on the other end of the industry: a terminal cancer patient facing his own mortality. This fast-moving, fascinating and heart-wrenching memoir shows a personal account of all sides of the oncology biotech industry: from CEO to patient.