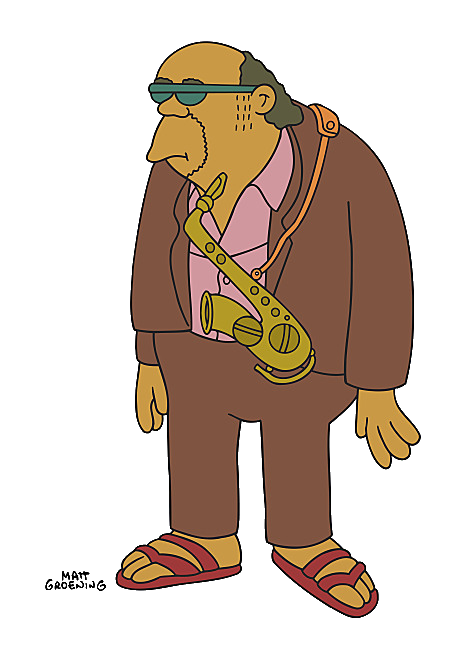 Fans of the early seasons of The Simpsons will likely recognize the tertiary character pictured above.  He was a jazz musician held in high regard by Lisa Simpson for his saxophone playing — and his name was Bleeding Gums Murphy.

It seems I am enrolled in his musical academy these days.

This gave me two concerns: (1) do I have some kind of osteonecrosis of the jaw issue related to the bone-strengthening agents I was on, and (2) do I have an issue with platelets that could be indicative of myeloma or leukemia or something else wrong with the blood.

I did a little research on osteonecrosis and it doesn’t manifest itself in bleeding gums, thankfully.

In my visit to the doctor this week, my labs showed platelets at normal levels (a little on the low side of the normal range, but 175K against a range of 130-400K being normal, so it wouldn’t explain this).  I did note that I bled more than usual from the site of the port access when they stuck me with the IV.  So something funky is going on.  But it’s not platelets.   Importantly, the most recent cancer numbers are clean as a whistle.  My immune system continues to recover from the transplants and now my IgG and IgA are both squarely in the normal range.  IgM continues to be very low — 18 mg/dL versus a normal range of 48-271.   By the way, who decides what normal rangers are?  Are they simply standard deviations away from the mean?  Why is it 48, for example, and not 50?  Modestly interesting questions but not so interesting that I’m going to research answers.

Argh.  Intellectual curiosity got the better of me.  Couldn’t help myself.  Yes, “normal” is determined by two standard deviations on either side of the mean.  Meaning 95% of the population falls in the range.

Okay, back to the primary point of the post.

I will be getting some analysis of some other things in my blood — “clotting factors” — when I return to Arkansas in a couple of weeks.  Unfortunately, a little Googling can be dangerous.  I had always assumed that if platelets are okay, then clotting factors are okay — but they are unrelated.  It turns out that you can have messed up clotting factors and have normal platelets.  And it turns out that if you have this…it can be hemophilia.   It can also be something called von Willebrand disease.

Now do I think I have these things?  No.  My clotting factors have been normal in the past.  And everything I know about hemophilia came from watching the movie Nicholas and Alexandra when I was a pre-teen.  I learned from this and my helpful parents that somebody in the Csar’s family (or multiple members thereof) died from hemophilia, which meant they couldn’t stop bleeding.  Years later I probably picked up the inference that all those inbreeding Hapsburgs passed this genetic problem along to their kids.

I may have my shortcomings, and some of them could be laid at the feet of my parents from both nature and nuture, but I can’t say there was a lot of inbreeding going on in my family.  They got that part right, anyhow!

Nonetheless, something is going on.  I shouldn’t feel a warm sense of blood when I run my teeth over my gums.  Even if they aren’t bleeding, it feels odd.  Something is amiss.

I’m going to the dentist next week.  I will confess I didn’t always take the best care of my teeth, but I am certainly not an extreme outlier.  I think in the quiet darkness, many of us admit to ourselves that we are not diligent flossers.  That said, while my gum health hasn’t been in the top decile, it’s never been worse than average and I’m a good and frequent brusher.  So I don’t think it’s just lackadaisical oral care that is contributing to all this.

The bottom line is: I dunno what’s happening.  And this falls in the category of slightly embarrassing things that I wouldn’t put out on the Internet for the world to see, but there could be others with this issue and if nothing else, I hope this blog reports side effects so that others experiencing them can be aware of them.

Secondary cancer in finger?  Check.  GI issues?  Check.  Hair loss from Velcade?  Check.  Weird rash on fingers and hands?  Check.  None of these are particularly dignified, but this isn’t a dignified disease.  And if talking about these embarrassing little topics can help a few people, then I’m prepared to endure some public indignity.  :)

I am participating in another CureTalk panel next Friday, so I will update about that soon.   Have a good weekend, all!