I perked up considerably this week when I heard that my young donor has agreed to donate again! In fact, she will be making the donation on the eighth of November, and the cells, on ice, will be flown to San Diego the following day where they will be divided and frozen. So, in about a week I will receive my first lymphocyte infusion (DLI). Cure is still a possibility!
We do have sufficient cells left over from last year’s transplant for one big infusion, so my continuing survival wasn’t entirely riding on the decision of my donor. However, a one-time, big infusion (which is how donor lymphocytes were given originally) could very well have given me severe graft-versus-host disease — even to the point of being fatal. While we have to have GVHD to have a graft-versus-myleoma effect, the risk of a big dose is unnecessary. If given periodically in lower doses, DLIs are just as likely to produce a response but are much safer. We could have gone with the Big Dose weeks ago, but I thought asking for another collection was worth the risk of delay. I wasn’t terribly worried that she (my donor) would decline to donate a second time: people who have actually donated, and not just registered their intention to do so, will almost always do it again if needed.
I must tell you, my life has been bleaker and more desperate in the last few weeks. The reaction to Velcade and Decadron, my reinduction chemotherapy, has been horrible. By the end of the cycle, I had deteriorated so much that I was predicting to Ivonne that I would be in hospital within days: I had become so weak that I could do little but lie in bed; neuropathic pain forced me to take six times my usual dose of pain killers (which blunted but did not control the pain); I did not want to eat; I would sleep for a few hours, wake up for an hour or two, then return to sleep. Because of an episode in early 2011 of tardive dyskinesia  after taking a tiny bit of Seroquel, I no longer am able to use a small dose of a major tranquilizer as a sleep aid. Eyes Wide Open!

The worst part was going through the agony of chemotherapy with little hope of success. My cancer had become resistant to everything but dangerously-high levels of dexamethasone by 2009: why should it be anything other than more resistant now? 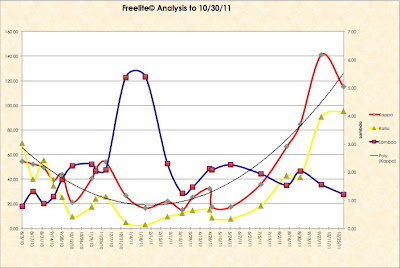 And there’s the surprise: this week’s measurement demonstrated a significant drop in the level of cancer. A chemotherapy that failed me years ago is now working. This is wonderful news because the likelihood of achieving remission after donor lymphocyte infusions is greater if you demonstrate a response to reinduction chemotherapy!

Not all the news is good, though. Myeloma has attacked my right optic nerve in the form of non-arteritic anterior ischemic optic neuropathy (AION), a devastating disease leading to blindness. I have some vision at the moment, but not much. The left eye has not been attacked thus far, but both eyes are often affected. If I make it three months without losing the left eye, I will probably be safe. The only thing that can be done to protect my remaining eye is to fight the cancer, which is something you can safely bet that I’m doing.

Since recently accepting that I had fallen out of remission after the allogeneic transplant, I have had to also accept the likelihood my impending death (median survival at progression, 4-6 months). I’ve been addressing all of the pressing things a dying person has to do to make life easier for those he will leave behind. I’ve been once more thinking about my Bucket List, although it is much emptier now than when I first wrote about it years ago. But the sadness was inescapable. I had the the sense that most of the things I thought important to do would be for the last time. For example, I’ve been showing Ivonne my favorite movies (Casablanca, African Queen, Lawrence of Arabia, etc.) being quite aware that I would never be seeing them again. I’ve been teary. I’ve worked hard to be a good father and husband, protecting my family and guiding them. I’ve been in the arena with Death for so long now I’ve become inured to my inevitable defeat: I’ve fought the best fight I could, which is comfort enough. I grieve rather for the sorrow and hardship I will leave behind.

Well, screw that! The game’s not over yet! The oppression on my heart has lifted. Cancer, I’m ready for you. Take your best shot! You are MINE!