My knitting has reached an interesting stage where I find myself with two single socks, His and Hers. 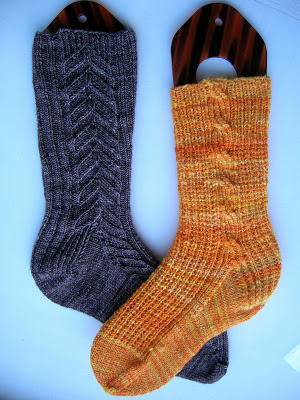 First to arrive in the singles club was Ms Chelsea Morning, who has been sitting waiting for her toes to be kitchenered for… um… two weeks?  She has been perched on a high stool sipping cocktails awaiting her sole-mate.  Her real name is Waffle Cream, but she thinks Chelsea sounds more sophisticated. After two weeks at the bar, she’s just a tiny bit tipsy 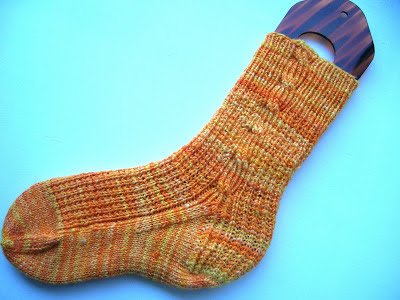 She has all but given up hope of pairing up when suddenly…
… who should burst through the door but John Huston, Tarnished Hero, clutching the lonely hearts section of the listings magazine to his throbbing instep. 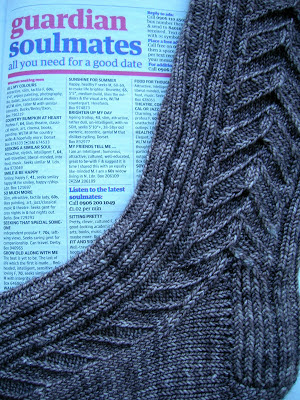 He has no time for pseudonyms or idle chitchat.
He walks right up to her, beer in hand:  “Hey Girl,”  he breathes in a husky voice,”You look mighty warm-hearted and squeezable.  Would you like to to rub your toes on my rippling twisted stitches?” 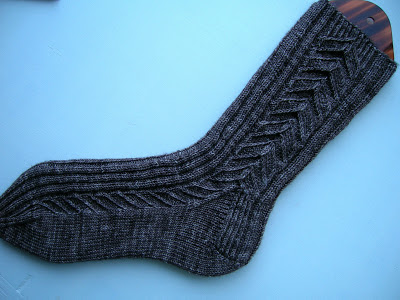 “Oh my!”  gasps Chelsea, swooning into her Butterscotch Milk Punch.
“A Guardian reader!  I bet you’re a feminist too!”

“Uh huh,” leers John,  “I won’t ever expect you to shave your legs or paint your nails!”
“But…will you do your own washing?”  she asks, breathless with anticipation.
“You better believe it, babes!”  he chuckles.
“And darning?”
“I like nothing better!”
“My Hero!”  she squeals, tumbling into his woolly embrace. 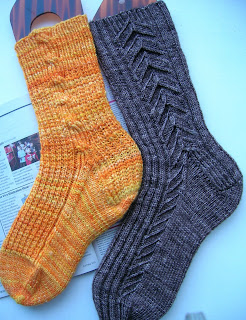 And may they live happily ever after….