The folks at PEREG were nice enough to send me a jar of this. Dom and I are HOOKED.  We tried this on our scrambled eggs this morning.

This is going to be our new “Go-To” spice!

It’s been rather chilly this week, so I made a big pot of homemade chicken noodle soup…  guess what’s going to zip it up?  YEP!

Introducing Everything But The Bagel Spice Mix from Pereg Natural Foods

Clifton, NJ, DEC 6, 2018 – Pereg, the leading purveyor of all-natural exotic spices, wants to shake up the salt and pepper standard. In fact, they think their newest spice mix may forever change the American table — and palate. 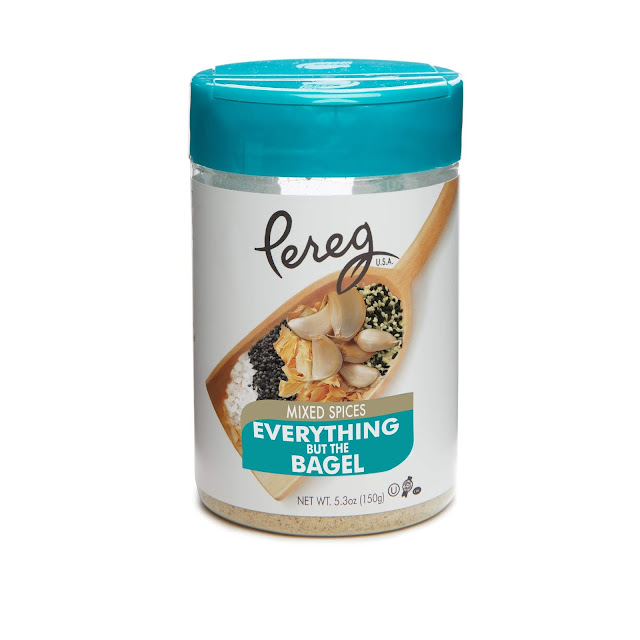 “Think about what’s on every kitchen table. Salt? Check. Pepper? Check. But that’s getting boring — and that’s not everything,” says Pereg CEO Gil Schneider.

Coming to the rescue is Pereg’s new Everything But The Bagel Spice Mix. Put it next to the salt and pepper and you’ve got, well, everything you need to add big, delicious flavor to breakfast, lunch, dinner, and snacks.

Everything But The Bagel Spice Mix gives you that irresistible everything bagel taste, without all the carbs. A special mix of natural flavors including onion, garlic, poppy, salt, and three kinds of sesame seeds, you can jazz up practically everything with it. Stir it into plain cream cheese for a flavor burst. Sprinkle it on grilled meats, avocado toast, rice, scrambled eggs, salads, chicken, pancakes, and more.

Like most great recipes, the Everything Bagel was invented from using leftovers. As legend has it, back around 1980, a teenager working at a bagel place in New York had the end-of-shift task of sweeping out the oven of all the toppings that fell off the different bagels. One day, after tasting the collection of leftover spices, he suggested to his boss that they not throw out the mixture as they usually did, but instead use it to create a new bagel flavor. Bagel history was made when the newfangled “everything” bagel sold out the next day.

“I really can’t think of anything that Pereg’s Everything But The Bagel Spice Mix doesn’t go with,” says Joy, Pereg’s spice guru. “It can add a zesty punch of flavor to anything at any time.”

“Here at the Pereg headquarters, we’ve been getting quite a taste kick out of sprinkling on everything — turkey sandwiches, ramen noodles, soups, you name it,” adds Joy.

Look for Pereg Everything But The Bagel Spice Mix in the supermarket spice aisle September, 2018. It’s fresh, 100% natural, gluten-free, vegan, and OU and CRC kosher-certified, with no MSG, additives or preservatives. A 5.3 oz jar will retail for $5.50.

Pereg was established in 1906 and is based in Clifton, NJ. They first became known for their vast variety of pure and natural spices and spice blends, more than 60 in all, from traditional favorites to exotics from around the culinary world.

Today Pereg produces an array of all-natural products that includes ancient grains and ancient grain blends, gluten free pasta, couscous, rice, gluten-free cereal and much more. Pereg Natural Foods products are available at select retailers throughout the US and Canada, and on their website, www.pereg-gourmet.com.

Pereg manufactures all its products from start to finish, controlling the quality from the sourcing until the product is packed and ready for the consumer. All Pereg products are kosher certified by both the Orthodox Union (OU) and CRC, are dairy and lactose-free as well as all natural, with no additives or preservatives. Many products are also certified gluten-free and non-GMO. Follow Pereg Natural Foods on Facebook.com/peregnatural, Twitter @pereggourmet and Instagram @peregnatural.