It is starting to feel distinctly festive around here.
All gift knitting has been completed and wrapped – woo hoo!
The Christmas Branch was sourced and decorated between rainstorms.
And the sun even came out so I could take its picture!

The kids are upstairs doing a 3000-piece jigsaw puzzle together, which according to the weekend newspapers is the signifier of a middle-class family Christmas – hooray!  We made it! ;) 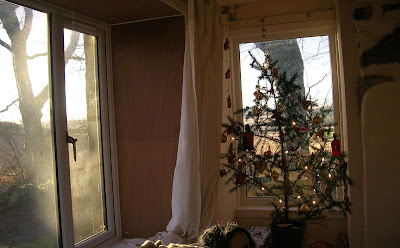 This morning, FL had his regular Haematology appointment, brought forward by a day for the holidays.
We had a new Doctor who was very pleasant, and said his numbers are “stable” and everything is “fine”.  Except… when she came to prescribe his Revlimid, she noticed that his dose has been reduced this month.  I asked why, and she said it was because his kidneys are not functioning as they should, so the dosage calculation is different.

His last three Freelite scores were:  24, 19, 24 (this last one in November).  She says that this is such a small variation as to be negligible, but on top of the change in kidney function, while still “fine”, triggers a reduction in his dosage.

So he is now on 10mg a day of Revlimid for three weeks on, one week off.  Back at the hospital in a month.  No further Freelite blood taken until then.

It was only when I got home and checked the blog that I realised his dosage had already been reduced recently, without me having noticed.  When he was first prescribed Revlimid in 2011, he was on 25mg a day.  I am not sure when the dose went down to 20mg – we certainly were not directly informed.  Maybe they were trying not to worry us.  But this feels like quite a dramatic reduction for someone who is supposed to be “fine” and “stable”!

But those are the words we must hold onto.  He is FINE!  And we need a “stable” on Christmas Eve. (Ho, ho ho!)

I am about to check my recipe books to refine the menu for the next few days.  Tonight involves the salmon I found in the freezer, with saffron rice and leeks.  Tomorrow it is unidentified game bird with roasted vegetables, sprouts and a spicy chickpea stuffing. The day after?  I have absolutely no idea… but it will probably involve leftovers.

FL took great delight in excavating an ancient jar of fruit mincemeat from the back of the fridge (if not from behind it, because I swear I threw it out at least a year ago…) so there will be mince pies after all.

I received a new passcode for my online bank account so I am solvent again, but the Storecupboard Christmas had already taken  root in FL’s mind so we are going for it anyway!

Right – I’m off to knit my Christmas hat!