8 years ago Today, I received my cleansed and cancer-sanitized Stem Cells back into my Myeloma ravaged body. I am proud and thrilled to still be here, able to tell my story and be as “functional” as I am, thank you to modern medicine, amazing people in my life, and my body’s ability to handle cancer killing chemicals!

I reflect annually, July 2 – 5 on my initial hospitalization for my Stem Cell Transplant, on July 5th, the Day My 5 Million little Stemmies were infused, and then for the entire month of July. Always I reflect. 24 7, I reflect on my life and my situation. Still so incomprehensible for me… 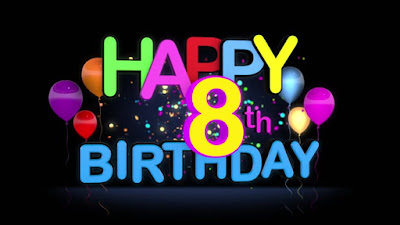 Sorry if you already read this on my FB page…

“On July 5th, 2010, at about 11:30am, after 2 days of high dose Melphalan chemo, and more supportive meds than I can remember, I received about 5 million of my own Stem Cells infused back into my cancerous body

The expectation is that this intensive chemo (after the previous 5 months I had already had), will kill off the myeloma cells, but not me, and the baby stem cells will revitalize, regenerate, renew my system. Lol that’s a ridiculously simplistic explanation, but essentially the process 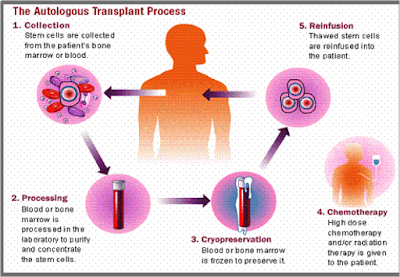 In the days following, I became extremely sick, which is to be expected, but my body took it to another level, as my “infusion tubes”, aka Hickman Catheter, became horribly infected. I had emergency “room service” surgery to remove it, and was on 5+ antibiotics simultaneously, and bags and bags of supportive meds and nutrition for the whole month of July 2010!

I was finally well enough to be released home July 28th, and treated with home health care for another month. I slowly recovered, lost my hair, and slowly rediscovered myself again. No doubt being isolated in a hospital room and very very sick is a life altering experience

😲
But here I am, 8 years later, able to share my (very edited) anniversary story with you! I am so grateful to be alive, and still able to battle these vicious, unrelentling myeloma cells trying to do me in

🤣
Tuesday’s chemo has now stolen my celebratory helium, and those energy producing steroids that allowed me to play yesterday, is biting back. So I will conclude my stories for now, and rejoin the world in a few days, which will be just in time to brave up for my new “bone strengthening” IV next Tuesday. The hope is this new med will make my bones, lesions and holes stronger, where myeloma has turned me in to swiss cheese

😲
On and on and on goes the unrelenting battle for my life. It’s as unbelievable to me, as it is to you! But one day at a time, one treatment at a time, and I live today, fighting for many more tomorrows

============
Here’s a look back on my 8 years of reflective posts.
They’re all so different, yet so similar.
Some years I was more reflective than others.
Some years I didn’t write as much as I do now.
Half of 2012, 2013 I wasn’t on Myeloma maintenance, and trying to be “normal” again. My Dr and I wanted to test my system and see how I would do without Revlimid continuing to battle on my behalf. Well, soon we found out Myeloma’s stealth and vengeance, and back into treatment I went, Fall 2013, and have been there ever since.

As I’ve mentioned so many times before, the longer I live, the more intense my situation and status becomes to me. I guess my “cancer reality” just sets in deeper, the longer I survive and battle this monster, and “suffer the consequences” of  continual treatments…

It was a very busy first week of July, as I had my monthly Darzalex infusion on Tuesday, July 3, then the 4th of July holiday was yesterday, and here I am, July 5th, exhausted from “playing” yesterday. Tuesday’s steroids are now waning, and the Darzalex and Dex steroids side effects creeping up on me…

To be continued…. as I have test results to report, and Dr conversations to share… Thanks for reading and caring as you all do, and I’ll post more medical details on my upcoming July 8th post. 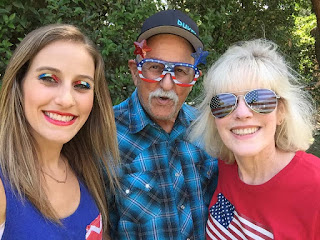 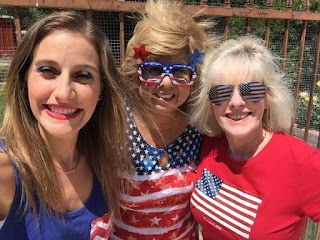 Thanks for going to the Parade with me! 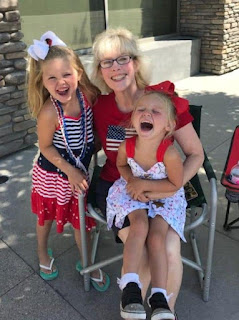 So fun to see these sweet Princesses at the Parade 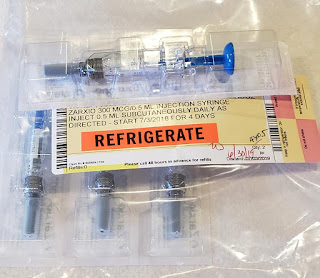 Shots and pie!
Happy 4th of July to America
Live happy, live well, and make a difference somewhere, somehow,
with someone or something as often as you can!