Dr. James Berenson, well-known myeloma doctor, has said that “there is little difference between complete response and stable disease.” I believe that, and I’m really quite happy with continued stable disease. I’ve been in the pomalidomide (CC-4047) study for four and a half years now, 59 cycles, each 28 days. IgG went up 3% from 1180 to 1210 mg/dL, but M-spike remained constant at 1.0 g/dL (1000 mg/dL). Lambda free light chains dropped slightly, while kappa chains increased a bit, but all markers were well within the range that we have observed in recent cycles on the study. Basically, there is no change. It’s all good – hoist a pint with me. 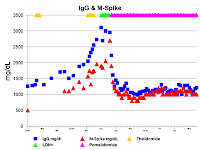 Nine years ago, at age 62, my primary doctory called and said “I have made an appointment for you with an oncologist.” Fortunately my myeloma was only smoldering then, with no symptoms. Five years later though, after two therapies had failed to halt the cancer’s upward climb, a PET scan revealed lesions (holes) in my bones, Stage I disease. A better treatment was needed. Dr. L suggested the trial, 2 mg pomalidomide (CC-4047) daily, with once-weekly dexamethasone (DEX). After the first four cycles, both IgG and M-spike had dropped by more than half, to levels not seen in years, and they continued downward. The DEX was gradually reduced to zero over a year and a half, and M-spike has been stable at about 1.0 to 1.2 g/dL on pomalidomide alone for three years. PET scans and X-rays suggest that the bone lesions are inactive and have probably been repaired.

My family and I attend support group meetings at least once a month, and I know how incredibly lucky I have been, to escape for nine and a half years with no disabling injuries or significant drug side effects. We are still running marathons (see Make It A Masterpiece), almost one a month lately, and have only three states remaining in our quest to run a marathon in each of the 50 states. That has all happened since diagnosis, mostly in the pomalidomide years. By December we hope to run marathons in New Hampshire, New Mexico, and Hawaii, finishing the 50 states.

The credit goes to pomalidomide, of course. I do take very good care of myself, with plenty of excellent food, exercise, and sleep, but those two little milligrams of “pom” are most certainly the key. Not only is pomalidomide keeping me alive and thriving, but it’s a very easy therapy to take, just one little pill every day. Life is full and I feel blessed. Not everyone’s myeloma responds to pomalidomide as mine has, but it is my miracle drug. Happily, it has been submitted for FDA approval and may be widely available next year.