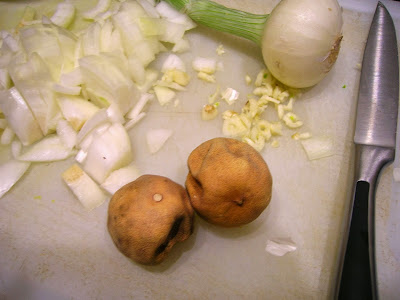 A little further down the list from “Cook The Books” (at number 26) which is all about making full use of my cook book collection, comes “Try New Tastes” (number 34).

The two aims are subtly different.  While I enjoy experimenting with new recipes, I am not so easily persuaded to try new foods.  I am super-sensitive to flavours and I “know what I like”.  Blue cheese?  Under no circumstances.  Beer?  You would have to hold my nose.  Shellfish?  No thank you.

But what delicious treats am I missing out on?  Come on Roo, live a little!

So the other day, when I was scanning the supermarket shelves on the lookout for dried dill and came across dried limes they had to come home with me, even though I had not the foggiest idea what to do with them.

I soon came across this article, describing them as: “Actual Amazeballs”!
But it was this piece in the New York Times which had me hooked.
And on Saturday night, I cooked Chicken Stew with Dried Limes.  No, not one of my vegan days.

Dried limes look pretty intimidating and I don’t see myself going down the route of smashing them with a hammer, scraping out the innards and then powdering the remains to use as a spice.  Apart from anything else, I don’t have a mortar and pestle anymore (Hello?  Santa Claus?  Are you reading this?!).  But it was a simple matter to pierce a couple and throw them into the pot alongside the chicken, the rice, the various alliums, dark green cabbage (rather than spinach) and a handful of green beans (because I felt like it).

The kitchen smelled fantastic!  FL pottered in halfway through, having just woken from a long sleep and stopped dead in his tracks:  “What are you cooking?  What IS that?!”
And we both truly savoured our dinner, taking far longer than usual to eat and compare notes on the meal, before going back to the pot for seconds :)

The interest it provoked in my dear husband made the whole adventure even more worthwhile.  He can be terribly traditional in his food preferences, but  loves a good spicy meal.  The fragrant floating ping-pong balls in this stew piqued his imagination and led to a discussion of other things I might try.  I remember seeing kokum in the corner shop when I lived in London – ooh what could I do with that?   Like dried limes, dried mangosteen apparently adds a tangy depth to a dish, what I have seen called “achari”: a musky pickley piquancy…?  And she’s off…

Back to the bag of dried limes, and it won’t be long before I try Yotam Ottolenghi’s Iranian Vegetable Stew with Dried Lime, without the optional yoghurt, for one of my 49 before 50 vegan days.

I love it when a plan comes together!

What about you?  Have you tried any new foods lately?