Skip to content
The past couple of years I had gotten almost completely away from CW and digital modes due to falling in with a couple different local 75 meter phone groups, but I finally got fed up with all the malicious interference/QRM and arguing, both which are rampant on 75 meter phone so this past week I abandoned it and have returned to my favorite modes of operating where the QRMers and Lids are few and far between.
I’ve also been doing a bit of operating on Feld Hell also known as Hellschreiber. I was very involved in that mode about 4 years ago when I used to call a weekly net for the Feld Hell Club and also helped man the W8H Feld Hell Special Event Station at the 2013 Dayton Hamvention. (Photo below). I sure have missed operating these modes where most amateur radio operators still behave with integrity! 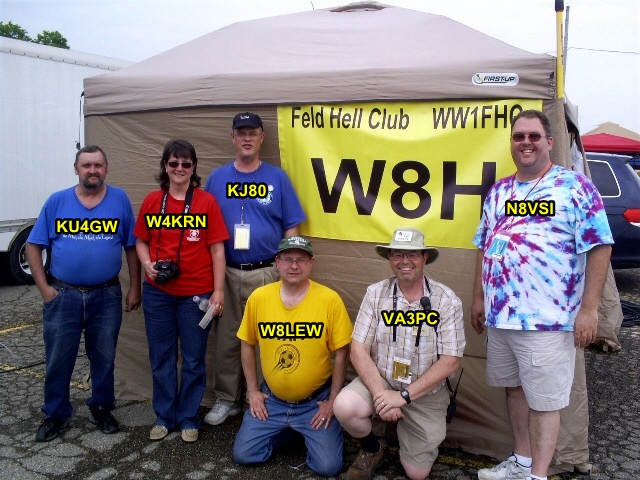 When the FCC dropped the Morse code requirement from the amateur licensing structure on February 23, 2007 they made a huge mistake! I speak from 21 years experience because since that happened all kinds of undesirable people have been showing up on the HF phone bands and the lack of any enforcement by the Federal Communications Commission has not helped matters! There are people that roam the phone bands for the specific purpose of malicious interference! I know this from my observations as a ARRL Official Observer since August 6, 2008. It’s the absolute worst I’ve ever heard it! 7.200 Mhz on the 40 meter band is a excellent example of how the FCC is not doing it’s job! If you can’t stand vulgar language stay away from that frequency altogether! Back during the aftermath of Hurricane Charlie there were QRMers interfering with WX4NHC, the amateur radio station at the National Hurricane Center and the Hurricane Watch Net trying to get information from and into the affected area of the hurricane damage! The Morse code requirement for licensing helped to weed out the majority of these kind of people because most of them would not put forth that much effort to get a license! It’s just a shame that the FCC sits idly by and allows these things to happen on a daily basis although they get paid very well for sitting on their hands or playing on the internet all day long at the taxpayer’s expense. I’d be ashamed to take advantage of my fellow Americans the way they’re doing! I really don’t see how they sleep at night!
Back to the subject of CW or Continuous Wave, the method used to transmit Morse code by the on and off switching of a continuous radio wave, It has always been my most favorite mode on amateur radio, I think it’s partly a nostalgia thing in my mind, but it’s also where you will meet some of the nicest folks who conduct themselves with integrity and maintain the high traditional standards of the U.S. Amateur Radio Service and that is why I like it so well! If the FCC were to ever do away with the frequency spectrum they’ve set aside for CW operation that would be the end of my interest in the hobby!
I have recently set up my station to operate on the newer digital modes of JT65, FT8, and FT9, but my preference are the more personal digital modes where I can actually have a conversation with someone instead of just swapping a callsign and signal report for the sake of getting them in my logbook. That’s also how I feel about contesting on amateur radio. I got into the hobby for relaxtion and enjoyment and a quick signal report exchange or seeing how many people I can contact in a certain length of time isn’t relaxing to me although it may be to some people = “different strokes for different folks!” I may participate in a 2 hour sprint, but I just don’t have enough patience to operate in a 48 hour long contest. For digital mode operating I’m using my Yaesu FT-1000MP Mark V transceiver with a FT-897D for a backup radio and I use Digital Master 780 in the last free version 5.24.0.36 of Ham Radio Deluxe software, but use WSJT-X software and JT Alert 2.1.2 for JT65, FT8, and FT9 digital modes. I use a West Mountain Radio Rigblaster M8 digital interface on a Dell 17R (N7010) 17 inch laptop PC. My current antenna is a 260 feet (79.3 meters) long doublet antenna fed with 450 ohm ladder line up only 30 feet (9.14 meters) high and I use a Palstar AT1500CV manual roller inductor antenna tuner. I also have a Hustler 5BTV vertical antenna in the works and just got a home brewed tilt-over mounting bracket for it courtesy of my good friend KM4JPL Jim in Grifton, NC. Also a radial plate that was made for me by NC4WS Wayne of Pikeville, NC who is now SK as of July 9, 2017.
Anyway, I’m so happy to be back and I think I’m staying this time! I certainly had better not hold my breath waiting on the Federal Communications Commission to do their jobs in enforcing U.S.G.S.§ 47 CFR Part 97 of the FCC Rules and Regulations that are intended to govern the U.S. Amateur Radio Service! Although there are a few Lids = Bad Operators on CW and digital modes I find they are very few and far between, but on phone they’re everywhere!  Hope to catch you on the bands!
Very 73 from KU4GW Cliff
ARRL Member for 22 Years, Member of the ARRL A-1 Operator Club since April 11, 2012
FISTS CW Club #16001, NAQCC #1491, Flying Pigs QRP International #1183
SKCC #652C, 4SQRP #536, QRP-ARCI #15877, Feld Hell Club #62, 30 Meter Digital Group = 30MDG #865, Digital Modes Club = DMC #6362