How about a post with mostly GOOD NEWS for a change. And a few “entertaining” stories! 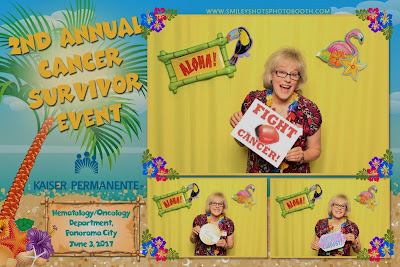 Not bad CBCs:
Yes my CBCs have rebounded since dropping dramatically the last few months. After my “trauma” with learning how to self-inject Zarxio, my WBCs cooperated and bounced sky high… well high for me lol. I think I had one WBC result actually in the normal range of 4.0, but it has since dropped back into the 3’s. But hey, I’ll take that any day over Neutropenic status of 1.7, 1.9 a month ago!

It’s Darzalex “break week” and I’ve had minimal residual side effects from 11 cycles of Darza, Pom, Dex. (Or perhaps my body is just getting “too” used to all the healing chemicals lol.) In the last few days though, my skin is starting to feel achy, some Neuropathy in my hands and feet, and strange… sometimes I feel like I have tiny bugs crawling on me lol. But that’s probably from the all my outdoor animal chores, as I think there are tiny bugs dropping from the oak trees, seeking me out as their host. But overall, I do feel better than several months ago when my myeloma numbers skyrocketed.

Next Dr appointment, with myeloma marker results, is coming June 14. This will reveal how I am doing on the 2nd phase of the Darzalex protocol of the every other week infusions. I’m really curious if Darza every other week, along with Pomalyst and Dex can still effectively keep myeloma at bay??!!What a miracle drug it is, just as it is, as it has been for me up to this point!

This past Friday was the last college Graduation Commencement of my career, and I (sadly) had to be a “no show”. I really struggled with whether I would, or could attend, as 1- it was super early in the morning, and I rarely ever feel good in the early mornings, plus Fridays are now my chemo crash days, with Tuesday Darza infusions, and 2- it was just too darn emotional for me, as my “retirement” June 30 is not “by choice”, but “forced” on me, thank you stupid myeloma for ending my beloved career as a College Counselor. So due to delayed Darza, Pom, Dex side effects, I wasn’t able to attend my last Commencement as an “employed” Counseling Faculty Member… 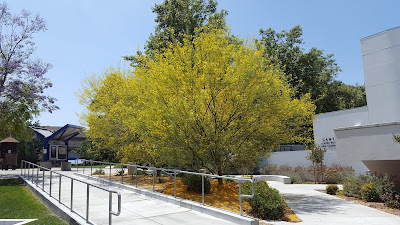 So this month, my task at hand on my “good days”, is to clear out my new office I hardly had a chance to use. So sad. My career began October 1981, fresh out of college myself, and I loved helping students realize their goals and dreams for almost 36 years. My career as a college counselor was incredibly rewarding, energizing, and always so wonderfully challenging in so many ways. Never a chance to get “bored” or did I ever have any regrets about my career choice. How my life has flown by, and how I still can’t believe that cancer completely edited my life… I went in yesterday to begin this process, and just parking on campus near my office felt so “normal”, yet so bittersweet sad. Walking into my office was so familiar, yet so strange and unfamiliar, as I haven’t been able to be Counselor Julie in person since October 2015. I had invited my Scholarship recipient Tanya in to brainstorm her life, degrees and career path, and she will probably be my last “in person” “official counseling appointment”. So wonderful to see my colleagues and catch up. How I miss this “normalcy” in my life. How I miss the daily routine of being a college counseling faculty member. How I miss all the stimulating conversations of “Saving The World, One Student At a Time”. 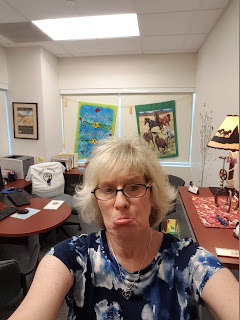 On the homefront last month, on my Darzalex week off, I was able to have a few experiences that gave me a semblance of “normalcy”! For so long, FATIGUE and exhaustion from my low low low CBC’s and my high high high myeloma stats, caused me to not be able to do much at all. For a long time, I just haven’t had much “helium”. I push myself to accomplish daily tasks, but most of the time my body is saying STOP and “chill out”, but my mind is always telling me to go go go, accomplish accomplish accomplish! This roller coaster myeloma lifestyle only gives me a few good days a week, and often those days are IV infusion treatment days, thanks to Dex steroids. But this past month, with Darza treatment success and the WBC boost from Neupogen Zarxio, I actually had a bit of energy. How I explain it to people is that feeling unwell and sickly is my “new normal” and my norm, but feeling well or “normal”, is now my “abnormal”!

Shockingly I managed to take the little doggies for a super fun walk with my ever so loyal, supportive friend Kathy. A few days later, on the way home from a Dr appointment for Jim, I actually went grocery shopping! These events are most likely uneventful and mundane to most, but huge accomplishments to me, as 1- I generally never have the energy to do either, and 2- never know what my GI system will ambush me with when away from my bathroom, and 3- I tend to strategically AVOID public (germy) places like grocery stores, WalMart, shopping centers, public events, etc. But I was pumped up on WBC building Zarxio, and enjoyed these events like a kid at Disneyland! 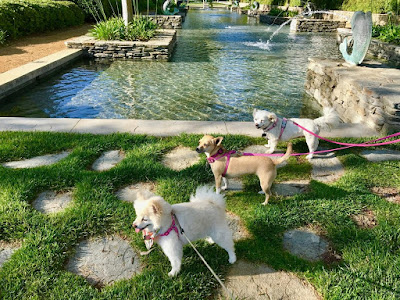 The Girls-  Portia, Nala, Hanna
Yippee for taking a walk and feeling somewhat “normal”!
Thanks for the super fun walk and awesome picture Kathy!

Last Tuesday became a complicated and actually a comical day. I was at the chemo lab all day for my Darza infusion, while our son Scott took Jim to his Dr appointment. He’s had extensive pain and swelling in his blood clot leg, that just won’t subside. He’s also had a strange sore on his foot, same leg. Ironically, we both wound up on IV’s on the same day! Sadly for him, it appears that the veins in his bad leg are not functioning properly, and we have to pursue this further. We just can’t believe what has become of our lives, as health issues dominate and control our lives daily. Crazy way to wind up, as we were both so physically and mentally active all our lives… 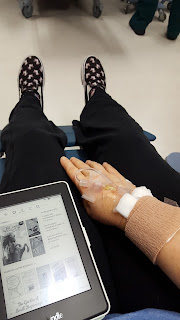 Me in the chemo lab
drinking up Darzalez and Benadryl 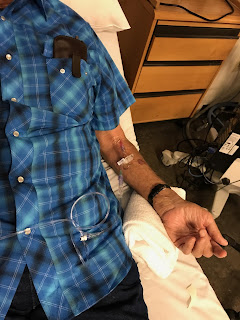 And if all this wasn’t enough, (and I have highly edited all these little stories), we’ve had to make the sad decision to “re-home” Domino our Rooster. If you remember from this time last year, my teacher friend incubated eggs in her classroom for a science project and we adopted the hatched chicks. One turned out to be a lovely Araucona hen, who hatched from a green egg, and now lays green eggs, (yes this is normal for the breed). The other cutie hatched out of a brown egg, was initially black and charcoal, then became black and white speckled, then he became a rooster, then he became an overprotective attack rooster, that seriously attacked us anytime we tried to enter the pen to feed, water and collect the eggs. Poor guy is only doing what nature intended, and what his raging hormones tell him to do, but he’s outta control and down right dangerous now. Never thought a “hand raised” chick could turn on us like this. Guess this is a powerful example of “Nature OVER Nurture”! 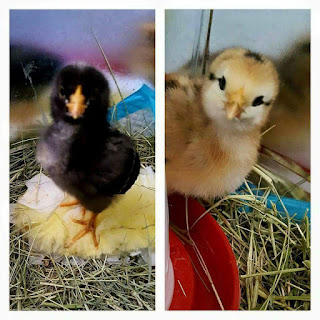 Domino the Attack Rooster on the Left,
and sweet Butterscotch-Rusty on the Right

Here’s the story: Last week I was changing the water container, and I knew Domino was eyeing me, with intention to attack, but we don’t go in the pen without “protection” of the hose and a spray bottle of white vinegar! (He stays away when we face him with the sprayers, and make direct eye contact with him.) Well, as I bent over unscrewing the lid on the water container, in a flash Domino was in my face, on my body, with his feet and claws attached to both my arms, like a crazy attack rooster body hug! I managed to shake him off, and spray him off with the hose, but not before he left his marks on my arms. I was so stunned, and quite pissed off, that I yelled all kinds of obscenities at him, sprayed him more, and told him He Was Done, he’s messed up a great life with 7 girlfriends and a super comfy ranch life. Sadly, he’s just too darn dangerous and unpredictable to have here, plus it’s taken the fun out of going into the hen house to collect the eggs and take care of the flock. You blew it Domino the Dominant Dangerous Rooster. Thankfully my awesome super supporter friend Susan found a home for him, with her neighbor. Now to just catch him safely this weekend, and off he goes to his new home… And yes, we had plenty of offers to turn him into Rooster BBQ, Chicken Soup, Chicken chow mein, etc, lol! 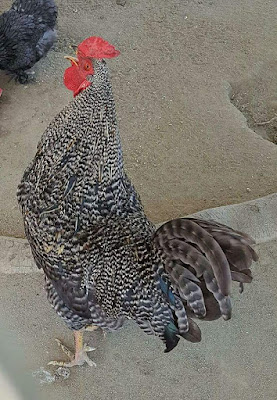 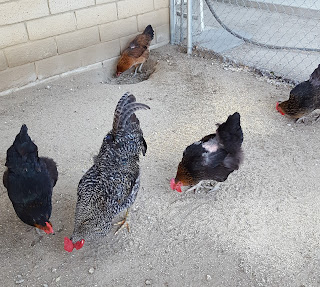 Domino and some of his girls.
Poor guy, his life is about to change and he has no idea.
I feel sad about it, but we just can’t deal with his “cocky” attitude any longer 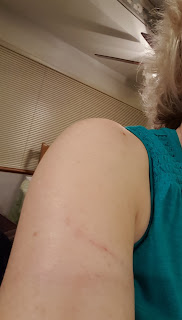 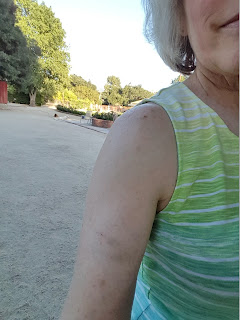 Here’s a couple days later,
you can see the bruises!
Can’t believe how fast his attack was!
And of course I worried about INFECTION

but so far, I’ve healed well, no infection drama! 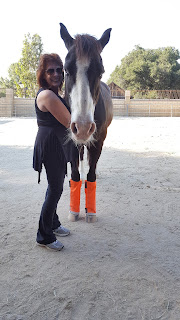 Thank you Susan for always being so supportive
and finding crazy Domino a home!
Glad you finally made it over after,
what, 10 years of planning? 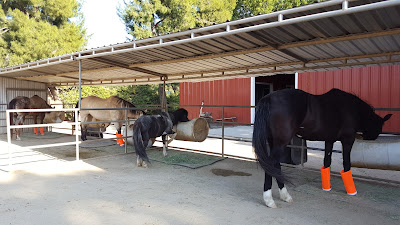 Found these awesome fly boots for the horses
Don’t you love the “CalTrans” hot orange!
And finally, with the success of the immune boosting Zarxio shots, I even got to break the Neutropenia precautions of no fresh fruits and veggies. When I went on my exciting grocery shopping adventure, I stocked up on the fresh “rainbow” I used to eat all the time. Back in the day, pre-myeloma, I’d make fresh salads daily, but not so much now with my WBCs always wavering on Neutropenic status. I even treated us to “vintage Bob’s Big Boy” dressing. WhooHoo, greenery, and healthy fresh colors! Sheesh, with these semi-normal activities, I’ve actually felt a hint of the ol Julie. Let’s just hope the success of my current triplet cocktail holds for a while, so I can “pretend” having cancer was just a mistake! 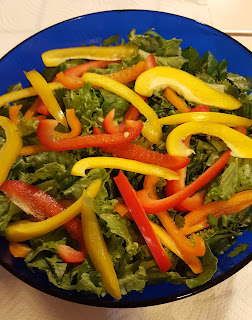 Just a start of the “rainbow” salad

Thank you my loyal followers for checking in, and appreciating my crazy adventures. Your comments sure mean a lot to me, as I love knowing you’ve stopped by and I love hearing about your life and your journey! Hoping for little “drama” in your life, and I’ll follow up with Domino’s re-homing adventure, not to mention my last few days as Counselor Julie, and any interesting news that comes from my June 14 Dr appointment.

Live happy,
live well, and make a difference somewhere, somehow, with someone or something
as often as you can