Skip to content
Hello folks.
I do a fair amount of outreach in the online and real world, and I’ve noticed that time and time again the same questions are being asked about transplants that were asked five years ago.  Should they be done at all?  Should they be done up front or later?  Should there be one or two?  It also occurs to me that doctors — even the most brilliant ones — may or may not be excellent at making decisions the way they are made in business, or even explaining concepts.  So I’m going to approach this using the reasoning that I’ve learned and applied outside the medical field and outside research to try to provide a different perspective.  I’m not a doctor — so please take all this with the knowledge that I’m just trying to make sense of something from a layman’s point of view.  I’d like to acknowledge the help of my good friend a fellow MM warrior Suzierose, aka Myeloma Cinderella, who is no fan of transplants (for well-founded reasons) but who has vetted the substance of what I write below.
We’re talking about auto transplants here, by the way, not allo transplants.
What a Transplant Is, and What a Transplant Is Not.
A transplant, first of all, is not really a transplant.
Think of a transplant as high dose Melphalan[1]instead.  Melphalan is a type of chemotherapy.  That’s it to a transplant, nothing more, nothing less: a transplant really is just a lot of chemo.  After this, you get your own blood back to help you recover.  That’s it.  There’s no “transplantation” and getting the blood back serves no purpose in killing the myeloma.  The purpose of an auto transplant is to kill Myeloma with Melphalan.  This is in contrast to an allo transplant, the purpose of which is to kill Myeloma by introducing a donor’s immune system.  That is an entirely different ball of wax.
An auto transplant is not a transplant of anything.  I suppose you could call it a replant.  But it’s best thought of as high dose Melphalan.
What a Tandem Transplant is.
It follow from the above that a tandem transplant is nothing magical – it’s just double the amount of Melphalan.  If you’re doing it spaced a year apart, it’s not a tandem transplant — it’s two single transplants.  The purpose – and value – of a tandem is simply to give you twice as much of the chemo at a time when the disease hasn’t yet become resistant to it.
Do transplants work?
Often, but not always.  It depends on what type of disease characteristics you have: very simply, if you have disease that is susceptible to Melphalan, a transplant will very likely be effective.  If you have disease that is not susceptible to Melphalan, a transplant will probably not be very effective.
Melphalan works by changing the DNA of cells in the bone marrow and getting in the way of certain processes that cells need to survive.  This process is called alkylation.  The Melphalan adds something to the DNA of cells that kills them.[2]
This kills a lot of cells.  It may not kill all of them; it may not kill enough of them; and it might also piss off the ones that survive.  It depends on whether or not the patient has myeloma that is susceptible to this precise type of treatment.  Most patients (80-85%) have cells that will be sufficiently killed by Melphalan to have some response.   Of that group, maybe half of them require a LOT of Melphalan to kill all the cells.
However…if the patient has cells that do not respond to Melphalan, not all the cells will be killed and the process of changing the DNA could result in an outcome where the remaining cells are resistant to this or other kinds of treatment, or whereby they mutate more rapidly and/or chaotically.
From this, a couple of things can be explained.  First, when people talk about “high risk disease” they have traditionally been talking about disease that has characteristics in common with other patients whose MM cells haven’t been killed sufficiently by Melphalan (or by other medicines).  Second, this explains the role of tandem transplants – some people need more Melphalan than others to kill all the cells.  Which explains when Melphalan was used by itself got 30% remission rates, but tandems do much better than that.
Do other types of therapy do the same thing?
Other types of therapy can be very effective, but don’t necessarily do the same thing.
Here are a few alternatives based on therapy I’ve received.
Traditional chemo used against newly diagnosed Myeloma comes in several flavors:
Then there are two classes of drugs that have come to be called “novel agents.”
Oh, and we can’t forget steroids.  Steroids suppress the immune system and kill plasma cells.  There’s prednisone, which is not as powerful or as effective as Dexamethasone.  If you’re killing plasma cells, you’re killing MM cells (they sit in the plasma).
It goes without saying that none of this is healthy.  The purpose, obviously, is to kill cells.  Killing cells through disrupting DNA is nastier and more chaotic than killing cells through other means.  Consequently, there are more side effects – both near-term and long-term – from chemotherapy that messes with DNA.  Patients must judge for themselves whether or not the additional side effects are worth the additional killing power.
Do transplants work as well as other types of therapy?   Do other types of therapy work just as well as transplants?
The answer is we don’t know yet.  We do know they work differently. 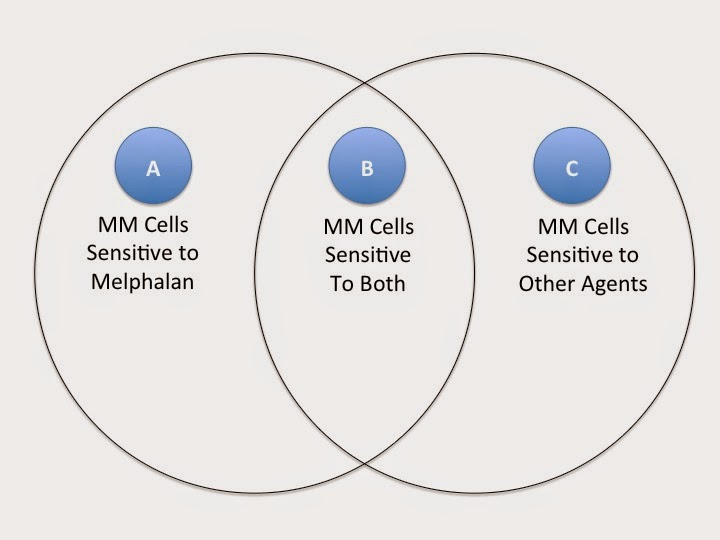