I originally started this entry a year ago, having recently attended the huge weekend symposium for patients with familial amyloidosis in Chicago (here are the details) with a planned trip to Rio for the International Symposium on Familial Amyloidotic Polyneuropathy.  Maybe it was the easy lure of Twitter. Maybe it was too many caiparinhas in Rio. Whatever the reason, I lost my blogging mojo, and put it away until now. Despite this, internet-trolling ‘bots have remained extremely interested in my blog, with over 15K hits originating in Russia, Ukraine, and China alone during this year-long absence. Hopefully I can lure some amyloidosis-interested humans back to the site with insightful analysis and witty banter.

I just attended the International Amyloidosis Society’s XIV Symposium taking place in Indianapolis. Tuesday, April 29th, was largely dedicated to ATTR (transthyretin) amyloidosis, so it seems timely to discuss an important publication describing a novel new therapy for ATTR amyloidosis. I hope to briefly discuss some of my favorite oral and poster presentations from the symposium in the near future. Here is a link to the abstract book for those of you who just cannot wait.

The paper, published in the New England Journal of Medicine at the end of August, describes the use of RNAi (RNA interference) as a means of selectively inhibiting production of transthyretin (TTR) but not other proteins.

Before discussing the paper, some background on the biology of protein synthesis. Cells make proteins in a multi-step process. The coded template (the gene) for each protein is found in your DNA in the nucleus of each cell. When the cell wants to make a protein, the gene for that specific protein is copied as messenger RNA (mRNA). This is called transcription. The mRNA leaves the nucleus, and then is translated into protein in the cytoplasm (the part of the cell outside of the nucleus). In ATTR amyloidosis, misfolded transthyretin produced predominantly by liver cells (hepatocytes) aggregates into larger insoluble fibrils of amyloid which deposit in various organs, injuring them.  Protein synthesis is summarized below. 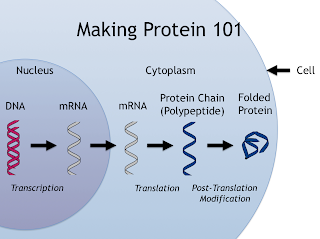 Dr. Coelho and colleagues conducted two sequential Phase 1 studies evaluating siRNA targeting ATTR synthesis. “siRNA” stands for small interfering RNA, which (together with a multi-protein cluster called RISC) finds, binds, and grinds a specific mRNA, thereby selectively shutting down production of the protein the mRNA encodes. Your basic silver bullet. The siRNA was packaged for delivery to liver cells (where transthyretin is produced) in lipid nanoparticles.  The two studies reported by Coelho look at two different nanoparticle preparations to deliver the same siRNA payload. The two preparations are called ALN-TTR01 and ALN-TTR02. The second one (ALN-TTR02) has since moved forward into clinical studies as the I.V. drug patisiran. There is also a subcutaneous formulation in development.

In the NEJM article, the authors showed that even a single dose of ALN-TTR02 could induce >85% knockdown of transthyretin levels. Even 4 weeks after the dose, TTR levels were still partially knocked down (albeit less so). The trials included patients with ATTR amyloidosis (the ALN-TTR01 trial) and healthy volunteers (the ALN-TTR02 trial). Side effects were manageable, with about 20% of patients experiencing infusion reactions that could be handled with steroids, temporary interruption of the infusion, and resumption of the drug at a slower infusion rate.

This week, at the ISA symposium, Dr Ole Suhr and colleagues (including Dr. Coelho) presented some data from a Phase II study of ALN-TTR02 in patients with Familial Amyloidotic Polyneuropathy, an inherited form of ATTR. Here is a copy of the abstract:

Analysts ponder whether 85% reduction in TTR production is adequate to alter the clinical course of FAP, and that of course remains to be determined. Here is a link to an insightful blog discussing the implications of this in terms of drug development.

Also presented at the mtg in Indy was an update regarding the status of ISIS-TTrx, another transthyretin mRNA-targeting agent using a different platform (its an antisense molecule). Here is the abstract:

The actual oral presentation made by Dr. Ackermann focused on her company and the general technology of antisense therapy.

As more information regarding both patisiran and ISIS-TTRx enters the public domain, I’ll update this topic.