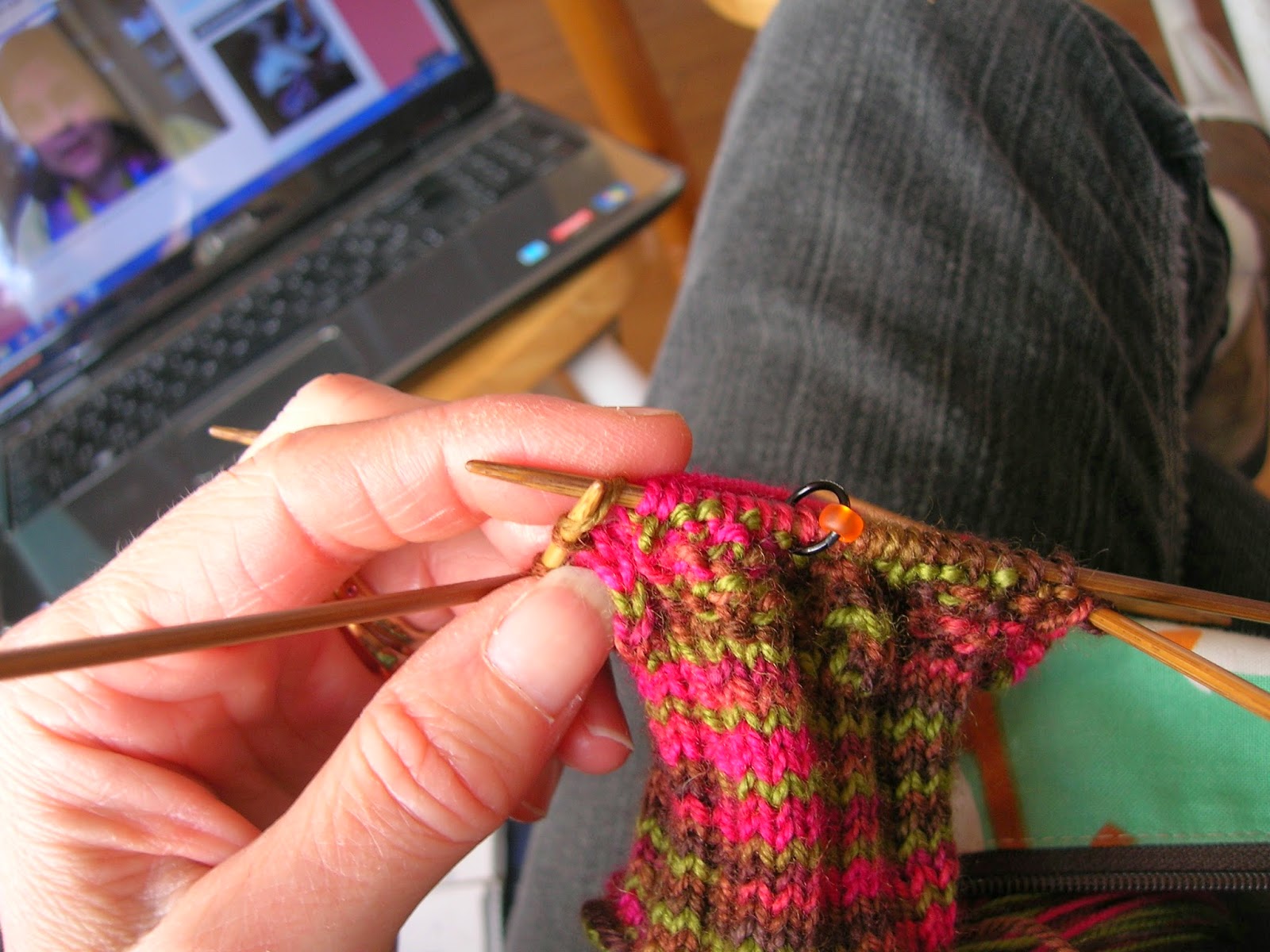 Settle down, pick up your knitting and the beverage of your choice and lets pretend this is a podcast.
Just don’t expect to hear my voice…
I already showed you my latest finished socks:  Arnulf.
I thought I would do the decent thing and get back to the second Solar Flair sock.  But honestly?  It isn’t making my heart sing to work on this right now.  It triggers my RSI like no other pattern I know.  And I keep thinking I should have used that lovely HazelKnits yarn to make another Vintage Fremont shawl – it would have been perfect!
This project is going back into the darkest corner of the sofa, behind my Monte Rosa cardigan.
No, I haven’t done any work on that, before you ask.  Maybe tonight. 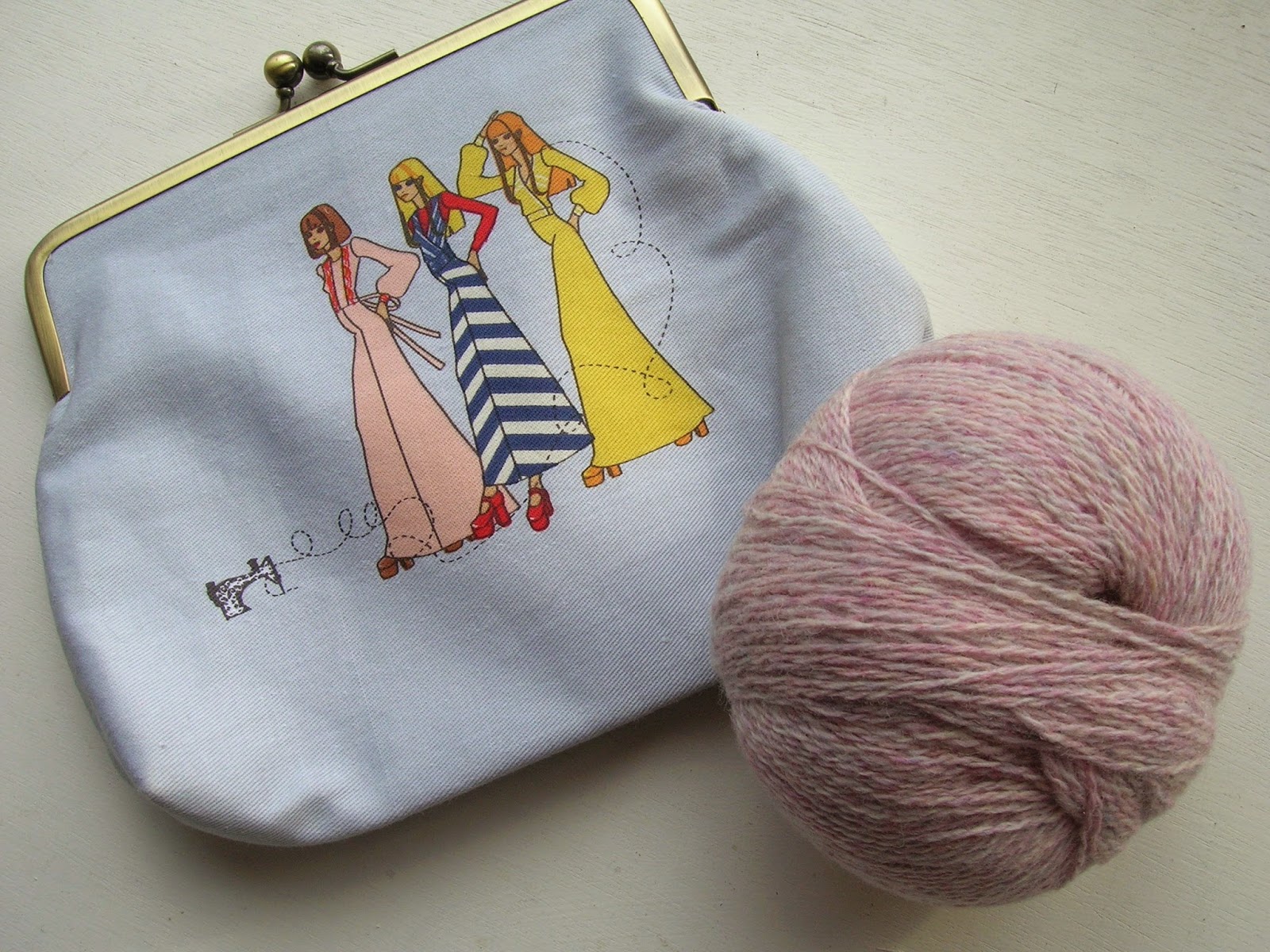 But first I want to cast on for another Rachel Coopey hat, the Ripon.
I met up with my dear friend Christine last Saturday.  While we lunched (on goats cheese, beetroot and raspberry salad with pecans and balsamic dressing – oh wow – bliss!) at Touched by Scotland, I was enthusing about the Toasty collection, and she volunteered her head measurement and the yarn to make her one of these hats – yay!  A willing victim!
This is JC Rennie wool, a lighter weight than the pattern recommends, so I might need to make a larger size.  Swatch for a hat?  I don’t think so.  Not me.
Also pictured is the amazingly “me” purse which she gave me – look at those 70’s styles!  It is Jackie magazine all over again!  I am planning to store my crochet hooks inside.  I only have two so far, but I have the feeling my collection may start to grow quite quickly, as I am hooked! 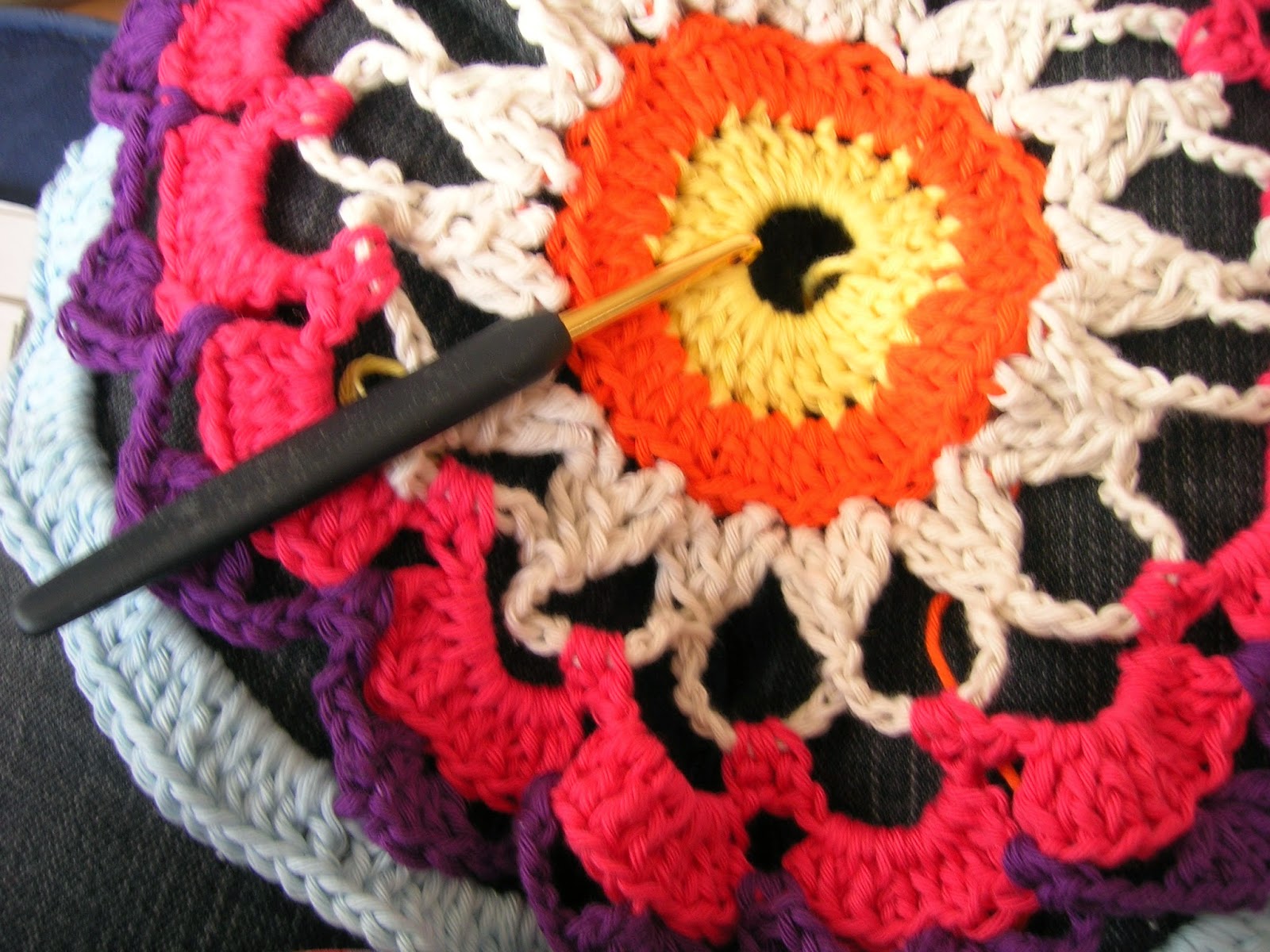 Here is the Inside Crochet Mystery Blanket as it looked this afternoon.  It is incredibly “open” in the centre, but becomes denser as you work your way outwards.  It covers my knees already!
I now have four copies of Inside Crochet and a serious crush on several patterns.  The Blue Notes Cowl has had me trawling the web for Malabrigo Rios, but I am holding off buying any more yarn for crochet projects until I get this blanket finished. 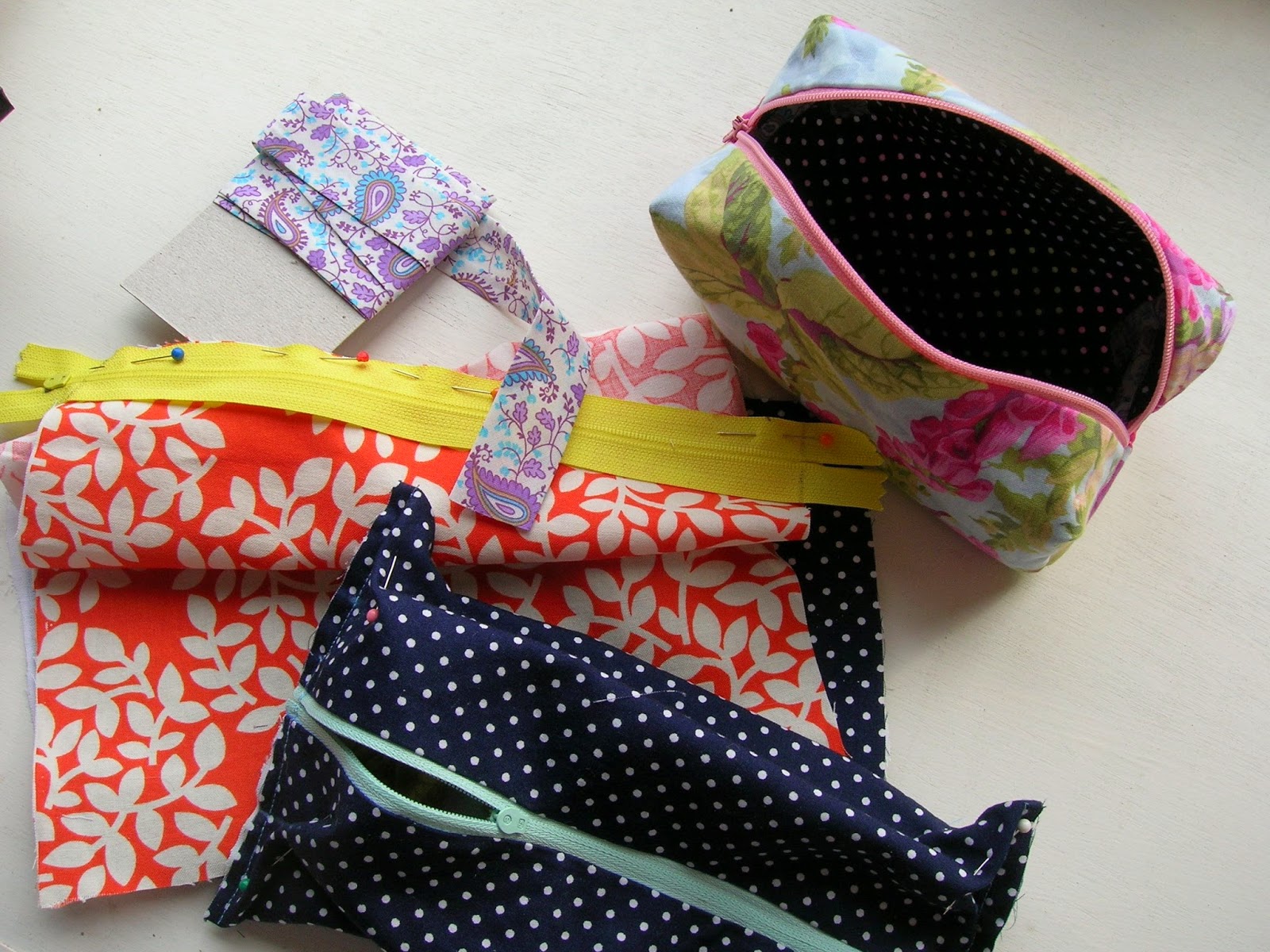 In sewing news, I have been rustling up another batch of gift-able project bags.
It doesn’t seem worth it to set up the machine for just one bag, so I tend to make them three at a time. 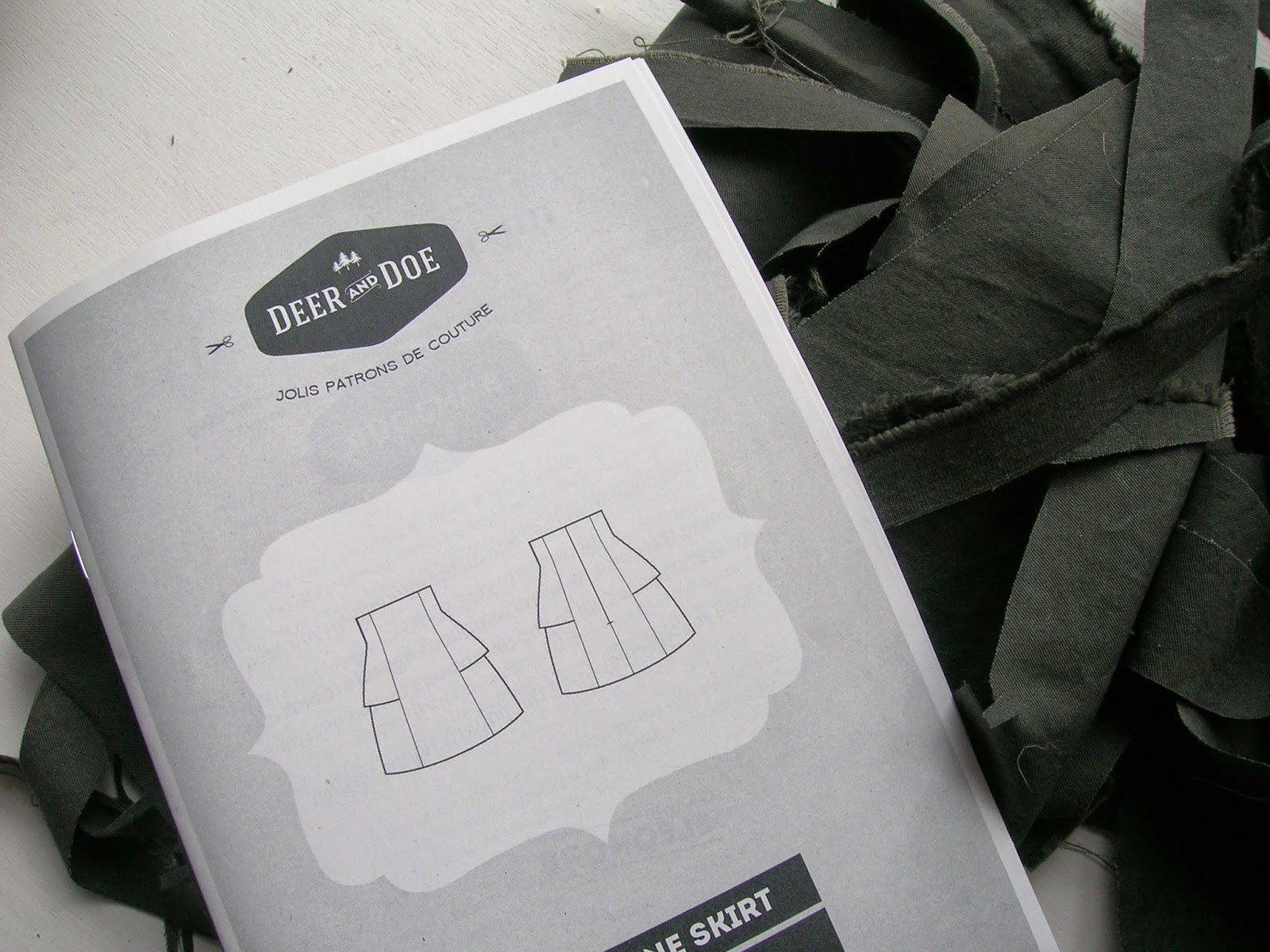 And I have cut out my first Deer and Doe Anemone skirt.
I am making the peplum, version using some grey / green organic cotton twill.
I managed to squeeze it out of just one metre of fabric, but I seriously do not recommend trying this at home – talk about a dangerous sport!  1.4 metres would be a far more sensible length to buy.
I went into Inverurie to the local fabric shop to buy a zip this morning, but failed to realise it should have been 40cm long.  So there won’t be a finished skirt this weekend.  That’s OK – I’m not in a rush.

While I was in town I dropped off a few more bags of goodies at various charity shops.
I was watching an episode of The Hoarder Next Door on TV a couple of weeks ago, where the psychologist who presents the programme asked a woman to go through her clutter and identify objects which made her feel “safe” and “unsafe”.  Ooh!  There’s a new approach!  She discovered that she had been hiding away things that provoked feelings of sadness and loss.  She had literally been burying them under stuff.
And it struck me immediately that I was “guilty” of exactly the same thing…
Meet my 20-year-old unfinished quilt project: 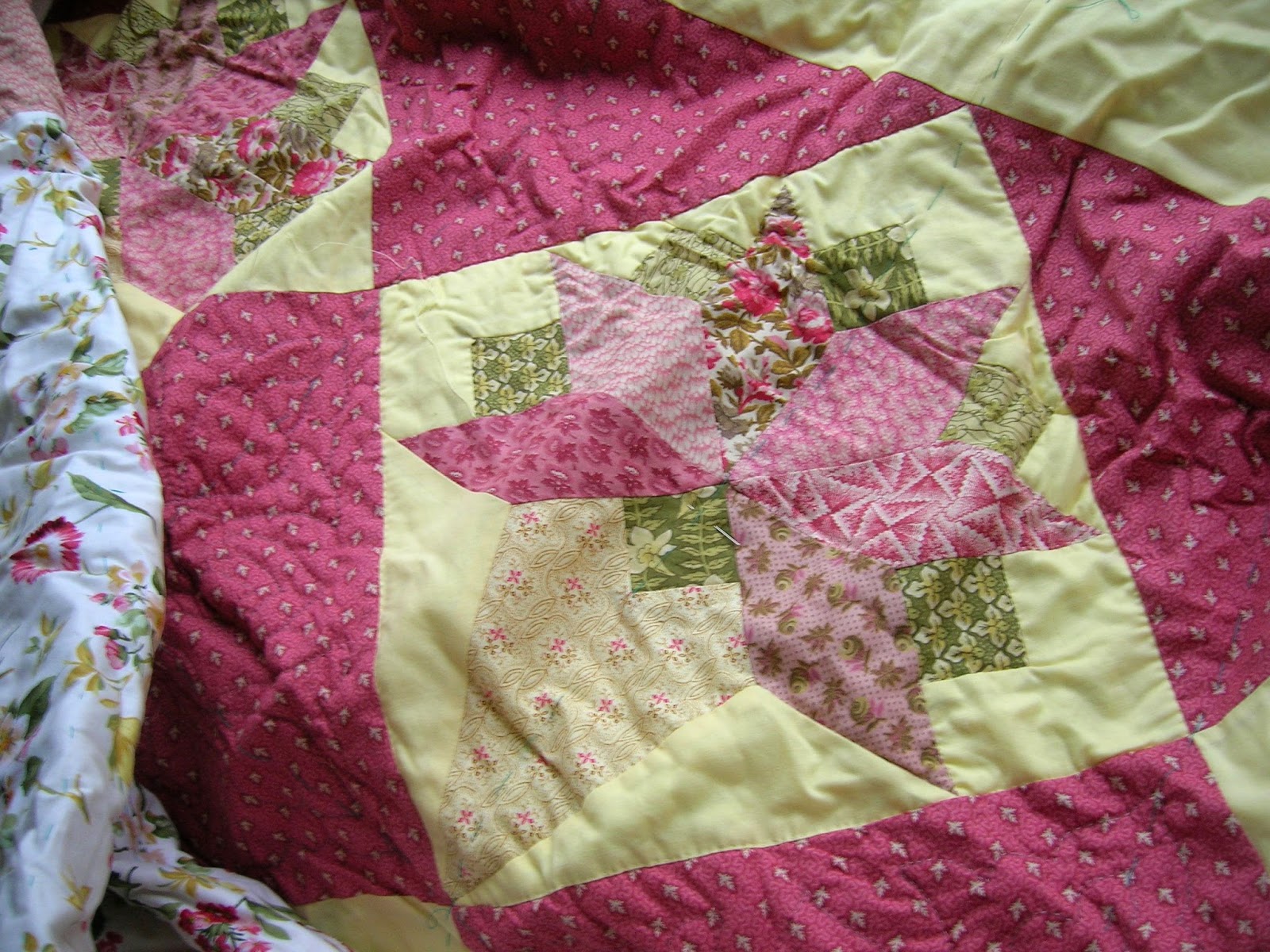 I had this stashed away in the secret drawer of my wardrobe.
Stelios would have a field day!
I started making this when The Boy was having his afternoon naps in his cradle.
All too soon, when he was just 6 months old, I had to return to my job and really struggled with my work / life balance.  Looking back, I suspect I had post natal depression.
This quilt became the Great Big Painful Unfinished Object.  I stitched away at it, off and on, until The Girl was born.
Then, suddenly… the sun came out in my parenting life.  Yay!
By that point, their dad and I could just afford for me to stay at home with the kids and I spent the next two and half years being “mummy” instead of pretending to be a super-duper London career woman (a role at which I sucked).
The quilt was put away in a bag.
The bag travelled to Scotland with me in 2004.
It went into the secret drawer and has stayed there ever since. 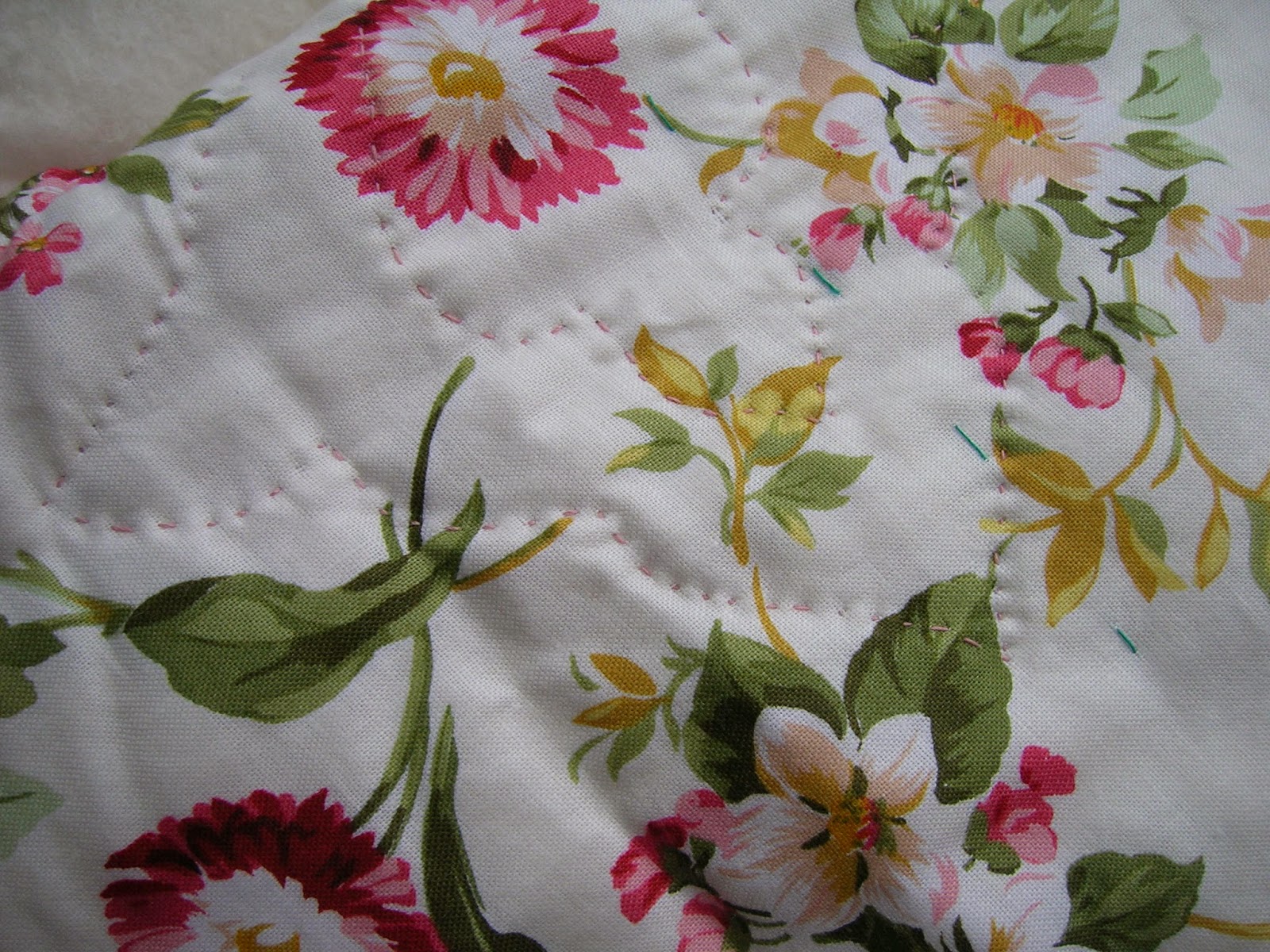 Today I took it to the Garioch Charities Shop, a destination I chose with care, as I know it to be a place where they keep a button box under the counter.  The ladies who staff that shop will not just lob this into landfill as rubbish, they will recognise it as an Unfinished Handmade Object and put it in the basket beside the vintage tablecloths, where another crafter will find it and see its potential.
And that thought makes me very happy indeed.
This psychotherapy lark really works you know! ;)