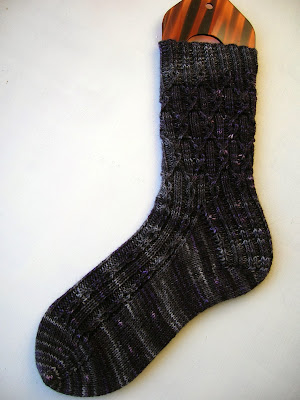 Two weeks into 2014 and I have… a sock.  just the one.
But it is a very striking sock.
This is the Thornfield pattern by Rachel Coopey and I am using Knitting Goddess sock yarn in the colourway “Morticia”.
Thornfield is a Jane Eyre reference.  It just had to be mine! 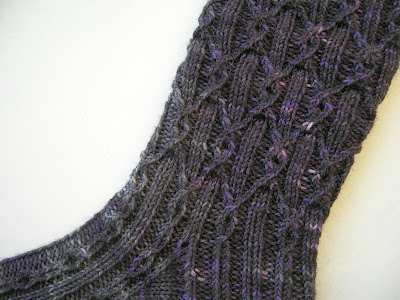 I appear to have knitted it in my own size.  How strange! ;)
Number two is already on the needles, but progress has been slow, because I have been trying to keep up with the Torirot Mystery Mitten knitalong. 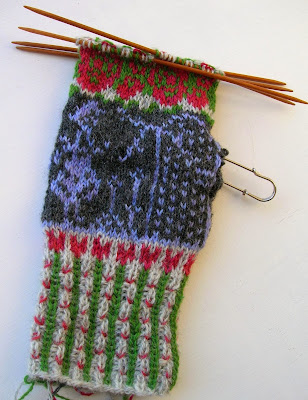 This is the left mitt as it looked at the weekend. 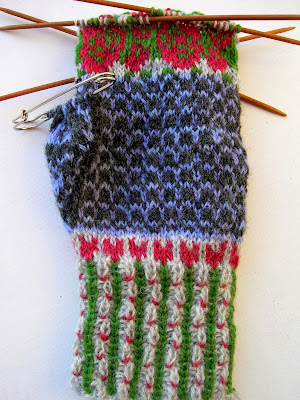 This is the same mitt, flipped over.
Since then I have been working on the next clue, which uses the grey and blue to work the top of the mitten.
If you look back at the first photo you might be able to see a slightly skeletal female figure approaching a garden door…?
The next clue has a little bird and a book.
The clever people in the knitalong group have worked out that this is a Secret Garden-inspired mitt, as in The Secret Garden by Frances Hodgson Burnett.
Oh my goodness – I just discovered that there is a version with illustrations by Lauren Child!  What a pity my daughter is beyond the picture book stage! 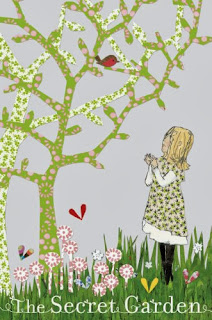 But I digress…
I am not totally convinced by my little girl – she is a bit scary-looking. But I am persevering.
What will happen on the right-hand mitt?  I am guessing it will be a depiction of Peter Colin (thanks to Rosylea for the correction!).  Will he be in his wheelchair?  That would be an interesting piece of Equality-Positive Action wouldn’t it?
That’s my lot this week.
I intended to cast on another sock, but I didn’t get to it.
I pondered my Japanese pattern book for a while, but chickened out.
And right now I am doing battle with myself over the “need” for a ball of self-striping sock yarn.  Because I already have 4 balls of self-striping sock yarn in the stash.  And I don’t need another until I knit at least one of those – right?  Right.