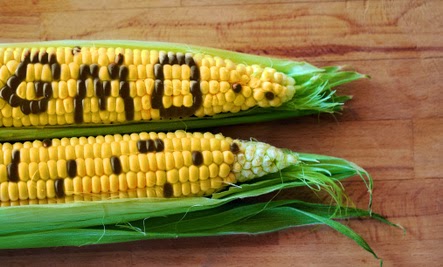 Last week, news broke that the USDA is recommending the approval of new, herbicide-resistant, genetically engineered corn and soybeans, sometimes referred to as “Agent Orange” GMOs. Here’s what you need to know:

Right after the announcement, concerns sprung up that this new GMO would be “an environmental catastrophe,” since the herbicide, 2,4-D, was an ingredient in the Vietnam War defoliant Agent Orange.

The USDA issued its initial draft of its environmental impact statement on the corn and soybeans (engineered by Dow AgroSciences and branded under the name Enlist), while the Environmental Protection Agency is working to decide on the environmental effects of the new herbicide, Enlist Duo. So, there’s still a chance that a pin could get put in the whole operation. Good news, of course, for those who are worried about the outcome.

So what’s really at stake? According to Grist.org, if Enlist is approved, there are some positives and negatives. The positive part is that fewer farmers would “adopt aggressive tillage strategies,” according to the USDA assessment. “Aggressive tilling releases a lot of greenhouse gas and leads to topsoil erosion and water pollution.” However, on the negative side, farmers will be spraying more herbicide. “We are already looking at a 75 percent increase in the use of 2,4-D in U.S. agriculture by 2020 even if Enlist flunks the regulatory process.” If approved, “2,4-D use will further increase by another two fold to six fold,” according to the USDA.

Many are wondering if an approval will mean that more and more of these types of GMOs are released. The thing is – 2,4-D-resistant weeds already exist. So the hope is that no matter what happens, Enlist farmers will be willing to change up their weed management practices more often, slowing the spread. But what if it’s used willy-nilly? USDA responds to that questioning saying that it “depends on management practices” and “cannot be predicted.” Not exactly comforting.

The fact remains that while 2,4-D was in Agent Orange, it wasn’t the really nasty stuff. We know a lot about it, given its history and the microscope it’s under. You can check this out for details on toxicity.

Grist.org‘s Nathanael Johnson maintains that “we’ve got to figure out a better way of doing conservation tillage rather than just relying on more and more herbicides. It would be nice if the government could use its regulatory authority to promote big-picture solutions. But in this case, the USDA is firmly focused on the small-picture tradeoff between tilling and herbicide. And in that small picture, it has determined that tilling is more harmful.”

Some of the potential dangers of ‘Agent Orange’ via FoodandWaterWatch.org:

Corn with 2,4-D resistance could be dangerous to eat because a metabolite of 2,4-D is known to cause skin sores, liver damage and sometimes death in animals. 2,4-D is a potential endocrine disruptor and can affect development.

Rats exposed to 2,4-D exhibited depressed thyroid hormone levels, which can affect normal metabolism and brain functioning.  Studies found that men who applied 2,4-D had lower sperm counts and more sperm abnormalities than those unexposed to the herbicide.

Not only is 2,4-D dangerous for human health, but it also spurs weed resistance. According to the International Survey of Herbicide Resistant Weeds, there have been 29 weeds found to be resistant to 2,4-D’s family of synthetic auxin herbicides.

On February 23, 2012, the National Resources Defense Council (NRDC) filed a lawsuit against the EPA for failing to respond to a 2008 petition to cancel registration of 2,4-D, citing its common use despite links to cancer, cell damage, reproductive problems and non-Hodgkin’s lymphoma. With the approval of 2,4-D resistant corn, NRDC claims that use of 2,4-D could grow 50-fold.

Aside from its harmful endocrine and carcinogenic effects, 2,4-D is a very volatile herbicide, which can easily drift onto nearby crops, vegetables and flowers. In fact, a comparative risk assessment found that 2,4-D was 400 times more likely to cause non-target plant injury than glyphosate (also known as Roundup, the herbicide many currently used GE crops are engineered to survive.)

If you’re concerned about the USDA approving 2,4-D herbicide, sign the petition below.