Skip to content
You’re down on your knees, begging us please, praying that we don’t exist. We exist.
We exist – Arcade Fire
I decided this topic was better handled as a “pre” rather than a “post”
One of my myeloma buddies asked a question online the other day. She was diagnosed within weeks of when I was, is on the same clinical trial as me, and was one of the first few people who I ever communicated with that also has MM. As fellow travellers, I suggested we catch up for coffee.

This has since morphed into about 10 people, all of whom I know only online, meeting up this afternoon. Pity anyone sitting near us in the pub (we’re so English), because the conversation will probably get a bit graphic.

Anyway, I don’t think anything they tell me will be stuff I’ll want to share with you. So I thought I’d write it up before it happens.

What is more worthy of note on DialM is that I’ve only ever spoken face to face with 3 people who have MM. And two of those only brief one-off encounters. I spoke to a couple more people on the phone, but that’s it. So today will be something of a milestone. And all “under 50s” too. Myeloma at my age is a pretty lonely experience. Less so today.

Lots of non-myeloma things have happened. I managed to enjoy the children’s school Christmas performance and keep all the awful thoughts of mortality at bay. And not many myeloma things have happened. My most recent bone-drug appointment got delayed (off to the hospital in a few minutes). I’ve postponed my clinic visit for a few weeks. My brilliant physio is working wonders on me. I can stand with my back against a wall and touch my head against the wall (just). 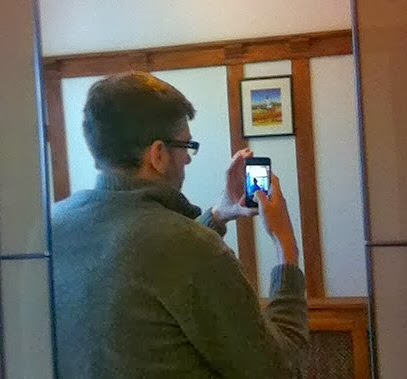 I had my first haircut for a year and a half (excluding a few head-shaves and one fluff-trim last autumn).

I do realise that me posting a mirror-image selfie puts me in a peer group with Kim Kardashian, but I can’t help that. And you wouldn’t want to see my arse (you probably don’t want to see hers) so at least I’ve kept it to a head shot. Look at all those neatly trimmed hairs. And not a chemo-wave in sight.