The Monsanto Corporation is among the largest pesticide and biotechnical corporations in the world today.

Their products are used in most sectors of agriculture, public land upkeep, landscaping/gardening and can be found in most markets across the United States. Monsanto is a multi-billion dollar company with a diverse product base and is among the largest producers of genetically engineered crops.

As a company, Monsanto promises to be the creator of new, safer, pesticides as well as stronger bio-engineered crops. Unfortunately, the reality of what Monsanto will deliver to the world is likely very different from what they promise, or what we, as a society, desire. 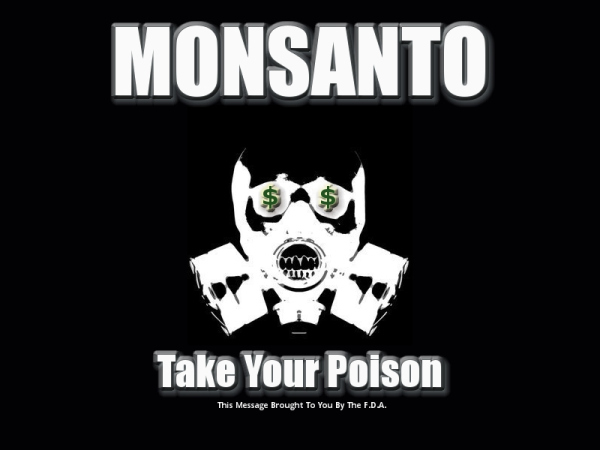 Monsanto has produced many products, from new types of pesticide to genetically engineered crops, and has been the center of several severe controversies. In numerous cases, the Monsanto Corporation produced and marketed products which they knew to be potentially toxic, yet they still sold them in order to reap a profit. While not illegal, largely due to Monsanto’s massive lobbying efforts aimed at reducing safety standards (Monsanto Spent $6.3 million dollars in lobbying during the 2011 fiscal year alone – Follow this link for more information on Monsanto’s lobbying), the sale of toxic chemicals for a corporate profit is both highly immoral and very relevant to those in society who wish to assess the use of Monsanto products. Put plainly: Monsanto’s history of selling poison, labeled as a useful product, casts doubt on whether any product that they sell should be trusted.

During its early years, Monsanto produced PCBs (Polychlorinated biphenyl) to be used in various industrial applications. PCBs, while very stable and good at acting as a liquid insulator, are extremely toxic to virtually all forms of life – they are carcinogenic, highly toxic, and corrosive upon contact with skin or mucus membranes. Even as evidence mounted of the toxicity of PCBs, Monsanto continued to produce them until they were forced to stop when the government banned all domestic production of PCBs in 1977.

The Monsanto Corporation has a long and sometimes unfortunate history of creating new and powerful pesticides. The infamous “Agent Orange”, used in Vietnam to destroy jungles, and the powerful pesticide DDT were two of the primary pesticides produced by Monsanto during its early years. While Agent Orange and DDT are now outlawed due to the massive damage they cause human life as well as the environment, Monsanto continued producing them for as long as the law allowed. The gigantic costs to human health and to the environment caused by the sale of Monsanto pesticides, even once they were deemed too dangerous to use, resulted in many ruined lives and destroyed ecosystems for society, but huge profits for Monsanto.

Currently, Monsanto is the producer of “Roundup”, a powerful and supposedly safe agricultural pesticide that has been the most common wide-spectrum herbicide for the past several decades. The major active ingredient in Roundup is a glyphosate salt, which makes it highly toxic for most common types of weeds. For added effectiveness, Monsanto has marketed a brand of “Roundup Ready” genetically engineered plants, which are immune to glyphosate salt poisoning, and allow for the use of pesticides during the growing process.

While not as dangerous as “agent orange” or DDT, there are several serious problems associated with glyphosate pesticide use. Glyphosate pesticides have the potential to breed “super-weeds”, in the same way that antibiotics breed “super-germs”. The pesticide kills all but the strongest pests, leaving the hardiest members of the population to repopulate the area. Eventually, once the weaker pests are culled from the gene pool, “super-weeds” are all that remain; at this point, modern pesticides will become nearly useless and far stronger (and more toxic) ones will need to be employed.

In addition to their potential to create super-weeds, some studies link glyphosate pesticides to damage to human cells, particularly in fetuses. Glyphosate is considered relatively safe by the FDA (Toxic Class III), but studies have shown that it can be damaging to embryonic and placental cells even if very dilute formulations. The potential danger glyphosate poses to fetuses is particularly worrying when one considers the wide use of the pesticide and the low concentrations necessary to cause harm. In addition to harming certain types of cells in the human body, glyphosate pesticide additives (Ex. the “inactive” ingredients of Roundup) have been shown to accumulate and cause genetic damage on lab rats. While the pesticide additive must be applied in large dosages for it to cause such damage, this raises questions about whether such damage is possible in other mammals, like humans.

A large portion of Monsanto’s business is currently in the field of “genetically modified organisms” (GMOs) This simply means that they alter the genetic structures of crops in order to hopefully make them more resistant to disease, easier to grow, higher yield, or less susceptible to predation by pests. Unfortunately, GMOs are often plagued by unintended consequences and side effects of genetic modification, which make them risky for human consumption. Monsanto has been embroiled in several serious controversies surrounding the safety of their GMO products – namely GE corn and recombinant bovine growth hormone – yet they have consistently continued to sell their goods.

Just recently, a study published in the International Journal of Biological Sciences seems to indicate a link between the consumption of Monsanto genetically engineered corn and organ damage in the liver and kidneys. This damage is consistent with the genetically engineered pesticide utilized by the corn, and seems to refute Monsanto’s claim that the pesticide will degrade long before it is consumed. Despite evidence that Monsanto’s GM corn may cause organ damage in its consumers, they have refused to recall their products. The refusal to recall their potentially toxic corn, in combination with their history of damaging their consumers for a profit, sheds considerable doubt upon their care for the health of those who consume their goods.

The doubts surrounding the safety of Monsanto’s genetically engineered corn are particularly important considering the fact that high fructose corn syrup is a staple ingredient in most processed foods. Monsanto GE “roundup Ready” corn is a primary source for most American high fructose corn syrup, thus any potential harm caused by this corn would likely be enormous.

Monsanto’s corporate behavior, both historically and currently, demonstrates a prioritization of profits over the safety of their consumers. It is evident that Monsanto will sell products, regardless of whether they may be toxic, for as long as they are legally able to sell them.

Not only does Monsanto have a pattern of selling toxic goods, but they lobby to prevent these goods from becoming illegal even after determining their toxicity, thus compounding the harm that they cause society. Monsanto spends millions of dollars a year in lobbying and is a very prolific user of the Washington DC “revolving door” (industry professionals becoming regulators and vice versa).

Some Monsanto goods may be exactly what they are marketed as – clean and safe agricultural goods – but, given their history of selling dangerous goods, there is little reason for the public to trust in their products. The Monsanto Corporation has proven numerous times that it will sell poison for a personal profit, regardless of the harm which their products inflict upon society. In the absence of regulators sanctioning Monsanto for its negligence, it is up to the public to stand up to Monsanto and call them out for their bad acts.

The next time you hear the name Monsanto in relation to a good which you are thinking of buying, please reconsider your purchase. It is entirely possible that the food is safe, or even of higher quality than other food. But there is also the very real likelihood that this food will damage your body. Why gamble with your or your family’s health when there are so many other alternatives to the potentially toxic goods of Monsanto?