Stats:
Pattern:  Artio Shawlette by Patricia Martin, from Issue 20 of Knit Now magazine.
Yarn:  Skein Queen Exquisite, a 80% merino 10% cashmere 10% nylon mix which has a soothing baby-soft fluffiness.  The colour is “Spring Lime” and that encapsulates it pretty well:  sharp, fresh, zest, spring-like – yay!
Needles:  Addi size 3.75mm.
I have lost their sleeve so I don’t know if these were the special “lace” Addis.  They have a gold cable and silver tips and were wonderfully smooth-running in combination with this yarn – a real pleasure to knit!

Process:
The designer suggests starting with a few rows of plain knitting if you think your cast-on is not loose enough to go straight for the yarn-overs.  But thinking about it, a few plain rows might have given it more stability at the cast on edge and prevented excessive stretching.  When I blocked mine (no plain rows), it grew and grew and grew… 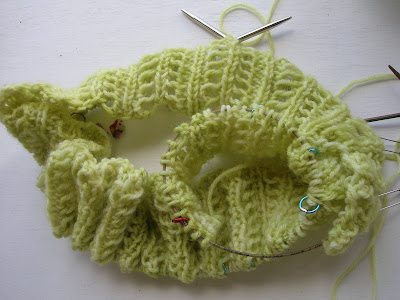 I chose to throw a stitchmarker in between each repeat of the yarnover columns.  This meant I used all my stitchmarkers plus an assortment of paperclips and safety pins.  I grew to appreciate my Fripperies and Bibelots snag-free stitchmarkers all the more, as the paperclips and split-ring-style markers had a nasty habit of catching the yarn and ripping at it – ugh!

By some miracle, I did not drop any stitches in this project.  Amazing!  (Lucky!)

The short-rows were taxing on my brain, as there was such a lot of counting to be done.  If I made it again, I would make better use of my stitchmarkers so that I knew when I reached, say, the blue one, I was at stitch 120, instead of having to count back every time.

I thought I was going to have loads of yarn left, but the border used at least as much wool as the main section, so there probably isn’t enough for matching mitts after all. 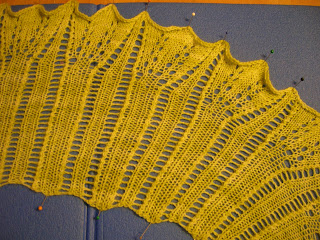 The schematic shows a shawl of 126cm by 24cm at the longest / deepest parts.  But after soaking it in woolwash for 20 minutes and gently rinsing the soap away, all those yo’s took on a life of their own and became super-stretchy.  I had to double the shawlette back on itself on my exercise mat to block it (hence the seahorse!).  I wanted to make the most of the points and avoid frills, so this seemed like the best solution. 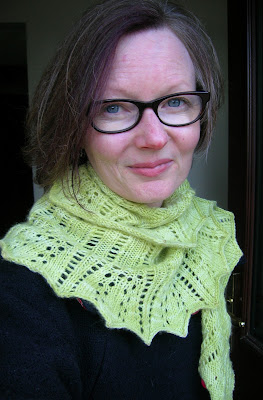 Verdict?
I really like it!
It winds about 3 times loosely round my neck and shoulders, with plenty of airy dangle and drape.
It is soft and light and warm in an acceptably spring-breeze-defiant weight.
The colour has plenty of uplifting zing without actually glowing in the dark.
It is going to be wonderful with my new season coat (if that ever happens).

*Leticia?  Because she is the colour of a lettuce.
Seahorse?  Because of her shape when blocking.

“Seahorses are truly unique, and not just because of their unusual equine shape. Unlike most other fish, they are monogamous and mate for life. Rarer still, they are among the only animal species on Earth in which the male bears the unborn young.
Because of their body shape, seahorses are rather inept swimmers and can easily die of exhaustion when caught in storm-roiled seas. They propel themselves by using a small fin on their back that flutters up to 35 times per second. Even smaller pectoral fins located near the back of the head are used for steering.
They anchor themselves with their prehensile tails to sea grasses and corals, using their elongated snouts to suck in plankton and small crustaceans that drift by. Voracious eaters, they graze continually and can consume 3,000 or more brine shrimp per day.”