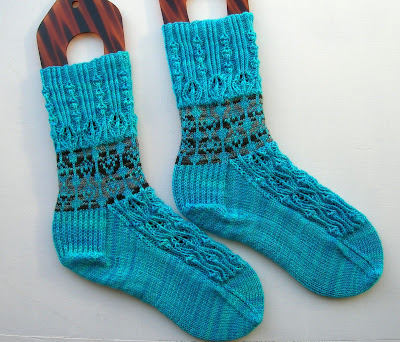 Process:
This pattern was designed as a Mystery Knitalong, with a new clue released once a week over 4 weeks.  I was too far behind to be a mystery knitter, having been inspired by Dianne B’s version when I met her at the Yarn Yard meet-up in York.

Dianne was knitting hers two-at-a-time on one set of circular needles.  I tried casting on while I was on holiday on Skye, but it wasn’t working for me.  My cable was too short and curly and it was a knotty mess before I had even managed the first row.

However, I liked the idea of knitting both socks side by side, so cast my pair onto two sets of dpns.
This was really successful!  Rachel Coopey had really thought about the week-by-week serialisation of her pattern and it was written with the skill of Dickens, leaving the knitter at an exciting point at the end of each episode :) 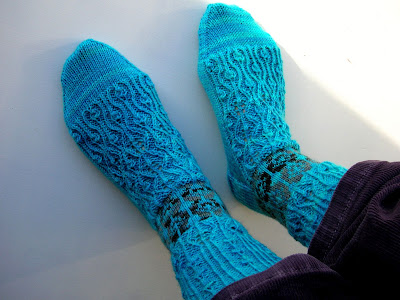 Episode One takes you from the fancy ribbed cuff through the first open lace section.
Episode Two is colourwork, with a very clever two-shade echoing of the lace in stranded knitting.
Episode Three has the heel turn and a return to the open lace.
Episode Four has a “closed” version of the twisted stitch pattern as you head towards the toe and the toe itself.

Fab!  This gave the project so much forward momentum and continuing interest.  And knowing that I was completing the pair along the way seemed to make it go twice as fast. 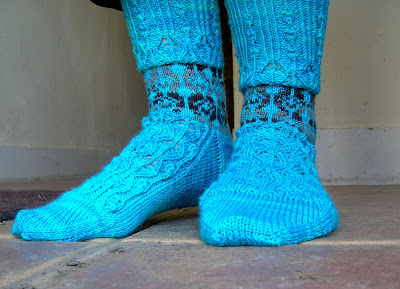 Verdict?
It was a really fun knit.
However, I have fitting issues, caused by my tighter tension across the colourwork section.  I really should have moved up to 2.5mm needles to take account of this.
See how it looks baggy above the two-colour section?  It’s more a case of the colourwork being too snug than the lace being too loose.
So I am afraid I will have to keep these for myself – aw!
What a shame! ;)