I have had frequent fevers since the summer of 2009. When I saw Dr. R in December he suggested I see an infectious disease specialist to determine if the fevers I had been experiencing could be caused by something other than the smoldering myeloma. I saw Dr. M who thought that I might be a Zebra and could possibly have a periodic fever syndrome.

Well… I don’t! The genetic testing was finalized last week and I have no mutations. I do not have a periodic fever syndrome. I am not a zebra. 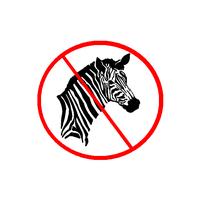 Dr. M said, “You don’t have any of the ‘KNOWN’ mutations for a periodic fever syndrome.”  Heh. I don’t think he likes being wrong!

After I saw Dr. M in January he requested as “homework” that I record my temperature when I first wake up and then again between 7-8PM which I have been doing quite diligently. When I spoke with him regarding the results of the genetic testing, I mentioned to him that I seemed to be having fewer fevers than I usually do. I had only had a temperature over 100.4 four times since mid January and my temperature was below 100.4 by the next morning. He was happy to hear I’d been, “cooler than usual” and added “you need to come see me more often!” Hah. He cured me!

But anyway, Dr. M still wants me to go to see this fever specialist at the NIH. Not sure if I want to do that (Mo doctors, mo problems! Remember?) or even if the team would still want to see me for the study because I don’t have any of the genetic mutations. He still wants me to have blood work when I first get a fever (CBC with differential, full chemistries (electrolytes and liver function tests), a CRP, a ferritin and triglyceride levels). Not entirely sure what he’s hoping to “see” in this blood work that would be different when I have a fever. He said the monoclonal protein being produced by the MGUS/SMM clone could somehow be short circuiting the way my body regulates my temperature and it triggers/allows the periodic fevers to occur.