Skip to content
Sleep was no better today.  I tried to remember times and just couldn’t, besides, today was busy.  Bottom line, i’m sleeping about 20min to an hour at a clip and waking up 3-5 times during the night.  Just don’t feel rested and due to that unrested feeling I also can’t focus.  Feeling more and more blonde every day!  Will have to get a blonde wig!

I visited work today.  Owing up to my blonde-ness, I specifically went into the bedroom to get a mask and put it in my briefcase.  But, one of the kids screamed, or the cat stepped under my feet, or ….SQUIRREL…. and I forgot the mask.  Which I didn’t realize till AFTER I got to work.  This meant I needed to go by Duane Reade and buy a package of 25 masks.  Later, much later, I found a mask in a different pocket of my jacket.  Go figure.  But today I went to the office to have a small breakfast and then was going to go visit a few people.  For those that have been reading my blog since the start, the discussion is always the piece that seems to be missing – I mean how do you ‘start’ the conversation (original post here).  The people I work with directly know.  The people I sit near are aware.  But it’s quite surprising how many people really have no idea!  I can’t blame them, I mean I didn’t tell them so I shouldn’t be surprised but it’s awkward to say the least.  I had one person that thought I was there to move their PC.  He felt bad once he realized who I was but then was blown away as he realized I was bald and had a mask on (not good signs regarding my health).  I also got a number of looks as I walked the floor, many people wondering who the tall skinny guy who’s bald and wears a mask.  I got plenty of exercise walking up and down from six to three to four to five, back to four, up to six, etc.  I finally realized I was tired and needed to get home! 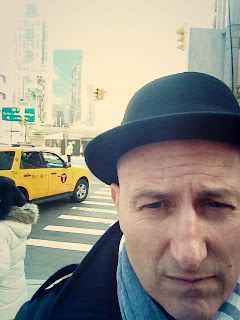 However, I did go by Bloomingdale’s looking for a new hat.  Found something on sale, porkpie style and I’m off!  Took this on the corner and forgot to smile!  Made it home and was going to just take it easy.

Until our sitter, who was just trying to help out, noticed that water was pouring out from underneath the sink.  I removed my sweater, took off my socks, removed the cooking racks, pans, etc. and crawled underneath the cabinet to find out what was wrong!  Our sink came with a spray hose but I later used the hole in the sink for a water filter.  But I couldn’t remove the hose, just left it under the counter, in the back.  As long as nobody pulled the trigger, it wouldn’t be a worry.

I know what you’re thinking – someone pulled the trigger.  Nope – plot line isn’t that easy!  The hose that connects to the faucet has a snap-on connector, which broke, spewing water all over the back of the dishwasher and out from under the counter.  Once I figured out what was wrong I could then head to the hardware store and pick up another hose or perhaps a connector that dead-ends so that I don’t have something with a ‘trigger’ under the sink.  Let’s head to the hardware store.  Vercesi (now renamed, 23rd, just off 3rd), “no – we carry threaded connections, not snap-on, that’s commercial, you’ll need to head up to 33rd and Lex to a commercial plumbing place”.  Warshaw (3rd Ave betw 20th/21st), “no – that’s commercial supply, you’ll need to head down to ??? on 2nd and 2nd”.  Now Town Hardware (1st Ave beta 19th/20th), “yeah, wait, it isn’t threaded? no, you’ll have to head up to 95th and Lex to get something for that.” But I turned to them and said look, I’m not looking for a hose – what can I do to just close down this aspect of the faucet, can’t I clamp something?  This is where ingenuity kicked in and they took care of me – for about $2.40.   A piece of hose (6 inches), two screw clamps and a pipe nipple.  Put the pipe nipple in one end of the hose (it will screw in).  Put one screw clamp over and tighten.  I was smart – I did that BEFORE I put the other end on the faucet extension.  I’ll explain that piece of SmartNess in a moment – but first I need to explain how easy it is to get at all this crap!

We have an under sink dishwasher.  More importantly, the sink and dishwasher are 3 feet away from the main pipes, so the sink drain, the feeds, all have to go three feet – more importantly those three feet are exactly where I need to place my head to be able to see up behind the dishwasher and underneath the faucet.  It’s also a 2.5 foot wide floor and I’m 6’2.  Bottom line, I need to lie on my back, use my stomach muscles to lift my shoulder’s up and then rest my head on the drain line.  I can get the hose on the faucet but then I need to tighten the screw clamp.  I try this but I can only get one hand up in there and using the screw driver wont allow me to get a tight enough clamp.  Then I notice I can use a rachet.  PROBLEM SOLVED!  I tightened that bad boy up tighter than a chastity belt.  I felt good, I felt done, I felt a sense of accomplishment – I felt like I needed to pull my pants up as well!  I asked our sitter to test the water and the clamp on the faucet worked like a charm.  But remember that part I did first, being VERY SMART?  Well, that was only screw tight, not rachet tight and was, of course, leaking!  So now I need to get the rachet on that one – except this one isn’t attached to a copper pipe.  The hose is clamped on a brass pipe nipple but that’s not attached to anything.  I can’t get two hands in there so can’t use my pliers.  Break out the bi-decade used vice grips.  Got that bad boy locked onto the brass nipple, attached the rachet, locked everything tight and now it all worked!  I grabbed all the tools, left my pants hanging down just right and did my best plumber imitation (I burped).

Mission accomplished – how’s that for Day 26 after a Stem Cell Transplant
(I did nothing else the rest of the day! :)