Skip to content
Today is Day 10 – this is the day when they expect my numbers will start returning to normal.  And I do feel better today but a little cloudy due to the “sleeping assistance” I asked for last night!
My insides are still having issues processing things and by the end of last night I was feeling like it had to happen but it just wouldn’t.  The big D was there, not to a large amount (volume), but enough to be bothersome and often enough to make things tender.  But when finished, and you returned to bed, your stomach started growling and you felt like you had to go back and do it all over again.  At 02:30 I finally decided it was enough and asked for help.  One Imodium and two 5mg OcyCodone and I started reading my book awaiting that moment when I’d finally pass out.  Unfortunately, it took a few hours for that to occur and by that time we needed to draw blood and do those early morning checks that we do.  From that point forward I was basically a vegetable.  The docs came in at 07:45 this morning and I was still out cold! 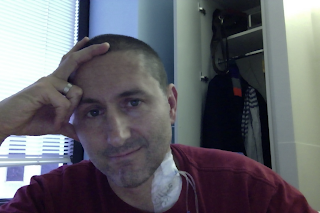 I felt good this morning, though a bit cloudy and have passed the day NOT watching Swamp People.  I tried to take a nap to make up for what I missed last night but that didn’t really work (the two lattes today probably didn’t help!)  Lil was kind enough to bring me my clippers so I was at least able to take down the whiskers that had grown with abandon for the past 12 days.  I can’t use a razor as my platelets are still low (but much higher than yesterday) but i’m fine with at least being this short.
On the numbers front, my white blood cell count has moved up to .5 (from .2) and my target there is 1.  Platelet counts moved to 29 (from 9) which is very good – the extra platelets yesterday must have helped!  I haven’t yet gotten my neutrophils back (for some reason those are taking extra long today! My target there is .5 and I was unregistered yday so I have no idea what to expect when I get them.
That is all for today, the snow is coming and coming hard (from my view of the projects on 101st/Madison).  Everyone stay warm and safe – i’m stuck here so don’t worry about me! :)