I have finished all 3 pending head-gear projects for future gifts.
Each caters for a very different set of special needs, and as a result looks better when not modelled by me!

First up:  Spirograph from Issue 10 of Knit Now (but also available to buy as a single pattern through Ravelry).  This is a head-band rather than a hat, as it is topless.  When I saw Kate make one and wear it with such style, I was determined to have a go. 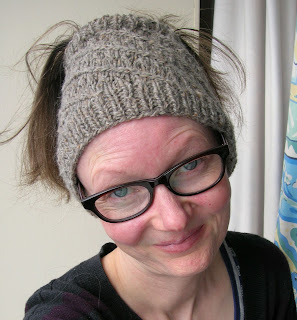 It was a really fun knit.  I am a great fan of travelling stitches.  It would be easy to make it into a “proper” hat, but this style is perfect for someone with a pony-tail or lots of curls or dreadlocks:  just pop your excess hair through the hole at the top.  Fab for a hill-walker too – ventilation and warm ears!  I put it on and I didn’t want to take it off.
Hmmm. This could be a problem :) 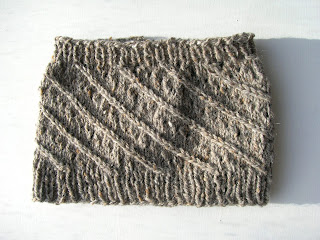 Yarn:  Berocco Blackstone Tweed in Steamers, less than one skein £8.75  Quite soft, with a warm halo, slightly sheepy and rustic.

Next:  the Edda hat from PomPom Magazine.  (Yes, I cracked and ordered a copy without seeing it in real life. Silly.) 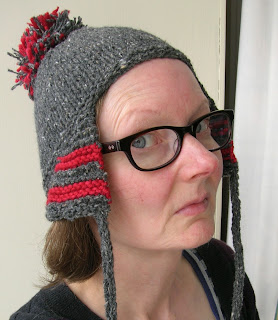 This one is designed for a small head with very little hair.  If you look at the models in the pattern photo, the boy is wearing it at a jaunty angle:  this is probably the only way he can get it on his head. (Before you ask me – yes, I got gauge and it measures what it is supposed to measure.)

The short-row ear flaps are picked up and knitted off the cast-on edge of the main bowl, and the i-cord is an extension of the cast-off… which is a clever idea.

But I struggled to know where to place the flaps on a hat that doesn’t fit my own head and I suspect they are off-balance and too close together at the front.  I hesitate to call this a design fault, but it is definitely a beginner-unfriendly scenario.
I also had a major pom-pom explosion situation when I tried to undo my Clover gadget.  I haven’t got the hang of this piece of equipment yet.  So my pom-pom is balding, straggly and liable to fall apart at any moment.  Uh huh. 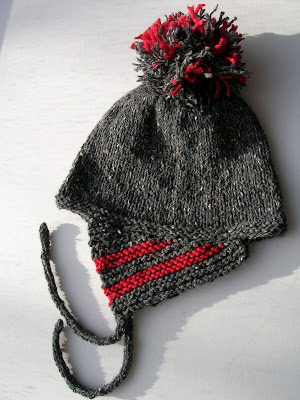 Yarn:  One skein of Berocco Blackstone Tweed in  a darker shade of grey, £8.75, and a few yards of leftover Malabrigo Twist for the red stripes.  This ball of Blackstone was nothing like the lighter grey.  It had none of its soft fluffiness and snapped really easily (leading to the afore-mentioned exploding pom-pom).  I should have washed and blocked the hat before I added the pom-pom but I was too impatient.
I have my doubts about this hat.  Probably it is best suited to an 11-year old Boden-wearing boy who is in touch with his feminine side.
I don’t know any of those.

Ah bliss!  A beautifully-written pattern which just flowed off the needles.
I made the largest size to accommodate The Boy’s dreadlocks. 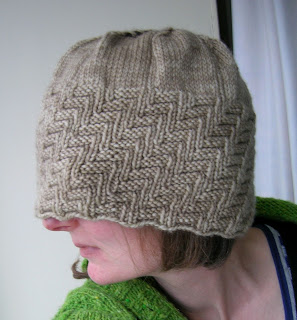 As a result, I ran out of yarn and despite making it less slouchy than it should be, I had to stripe the last few rows.  Oops.

I will definitely be making another one in a smaller size in another colourway of the same yarn.  Ooh – I could make one for his girlfriend and they would match – aw bless! 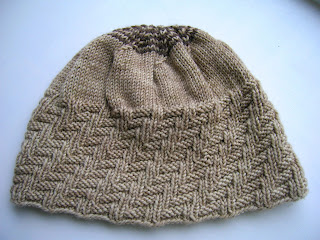 Yarn: Lioness Arts MCN DK in the Archive colourway.  If I could, I would marry this yarn.  So soft and smooth and strong and lovingly huggable!  Stripes at the end: Wensleydale Longwool in Natural Black.

So there you have it:  a whole heap of altruistic knitting, and it’s only February!