If I could give an award to each of the tests I have had they would be…..

When I was diagnosed with MGUS in 2009 I did not have a bone marrow biopsy. I was told the test was not necessary at the time because my m-spike was so low and I was categorized as low risk. If I could go back, I would have had the test when I was first diagnosed. Despite the pain, I wish I had a baseline and knew if the percentage of plasma cells were the same over the last three years or if they have increased.

My first biopsy and aspiration was this past July. When my doctor said I should have this procedure to be “super careful” before getting pregnant he described the procedure as being very quick – just, “In….and out.” He pushed his finger onto my lower back as he said this. A very small needle is used for an aspiration, and he said the procedure is painful, but only for a few seconds. Ugh, I hate needles. But, my thoughts were that this would not be a huge deal. “In…and out” – I could certainly handle that!

I told my family,  Yeah it’s  just a simple aspiration – in…and out! A few members of my family mentioned that some people get sedated when they have bone marrow biopsies. I said, No way, I’m just having an aspiration. The procedure is simple, quick, just a very small needle, in and out!

Okay. I love my doctor. I am actually very thankful that I was told it was just, “In…and out” and I didn’t google “bone marrow biopsy and aspiration” before I had the procedure. Because honestly, it was a heck of a lot more than, “In….and out!”

This is a real, “medically-technical” description of a Bone Marrow Biopsy and Aspiration in case you are interested.

Here is my biopsy story. Which is really not at all a “medically-technical” description.

One sunny July day, a lab tech takes my vitals before my bone marrow biopsy. My blood pressure is a little high (for me that is, it was like 110/75). I attribute this to be a little bit anxious.

Next. PA comes in looks and me and says, “So, your nervous?”

Ahem. Is that a statement or a question? Well. I am. But should I be? Now, I’m really nervous.  PA describes the procedure. Turns out I am having an aspiration AND biopsy. Whoa, whoa whoa, what happened to the “in…and out!” simple aspiration? PA explains that she only has to go in “one more time” for the biopsy (piece of the bone). Wait, what? One MORE time? What happened to, “in….and out!”???

{Little did I know this was just the start of the, “Wait…what? I thought this was no big deal!” mantra that I would be repeating for the next several weeks.}

I sign a consent form. My mind is racing.

I am asked to undo my pants and lay flat down on my stomach on this little bed. Heh. Luckily, there is a pillow. PA makes small talk – she apparently hates kids and thinks I am crazy to want to get pregnant when I teach children all day. J comes over and holds my hand. Aww.

From this point on I can’t really “see” what is happening. But I do feel it. J later filled me in on what the procedure entailed.

It was no joke.

The PA injects lidocaine into my skin and asks, can you feel that? I can’t after the initial burning.

Next, more is injected, this time down the the bone.

A small incision is made to make space for a special needle. Later, J said it looked like a straw with a triangle on top. Very technical description.

This is what the Jamshidi needle actually looks like. The “triangle” part is used rotate the needle into the skin down to the bone.

Sidenote: I love how the guy in this drawing is totally chillin’ with his chin on his hands. Like he is relaxing on a towel at the beach staring off into the ocean.

For the record, I was NOT chillin’. I was laying with my head to the side CLUTCHING J’s hand. And luckily, I got to keep my shirt on.

When the PA started the aspiration it was really, really painful. I had CRAZY cramping/lightning pain down the back of my left leg into my foot once she started drawing out the marrow. I actually still (it’s December, biopsy was in July) have sciatic pain down the back of my left leg (mostly when I am sitting) so I think she must have hit a nerve. I kicked off my flip flops at one point because the pain was so intense and my legs were totally spasming.

During this intense pain the lab tech guy kept leaning in close to my face saying loudly, “ELIZABETH, WHAT ARE YOU FEEEEELING?”

In addition to the leg pain/cramping/spasming (from what I have read, I don’t think most people have this type of pain if the needle is positioned correctly) I felt a deep, deep, almost gnawing pain, like something was being pulled from my core.

Which, ironically, was what was happening.

At one point part way through the aspirations I got really nauseous (nauseated?). This crazy wave of nausea came over me out of nowhere and I was terrified I was going to throw up. Luckily, they gave me an ice pack for my neck and I felt better.

The PA drew 4 vials of liquid marrow (it just looked like blood) and then went in again for the biopsy. The biopsy was actually the least painful part, much less painful than the aspiration.

I made it through! The PA put a big bandage over the area and I was told I needed to leave it on for 24 hours, refrain from showering during that time, and no physical exertion for a day or two. Lab tech guy took my blood pressure (it was actually lower than before the procedure!) and asked me if I wanted to see the bone. Heh. Of course I did. It looked like a 2 inch long piece of thick spaghetti.
Wish I took a picture. But sadly, I did not. Maybe next week after my second biopsy I will. Heh. Maybe not.

Back to the story – Results would be ready in a week and I was supposed to get an email or a phone call stating that the plasma cells were below 5%. My doctor actually said in my appointment right after the biopsy, “I REALLY think you are going to be below 5% – knock on wood.”

Unfortunately, I got an email and a phone call saying that I needed to make an appointment to discuss the results. The plasma cells were not below 5%. Way to jinx me! ;)

Let’s be honest, I don’t really understand how to read the biopsy reports. I’ve literally googled almost every word and it’s still like another language to me, even after the follow-up appointment and everything was very carefully explained. Meh.

Here are the reports. Notice how Dr. R circled the 6-8% and 10-15% and then drew a picture of the bone showing that the biopsy hit a more concentrated spot? 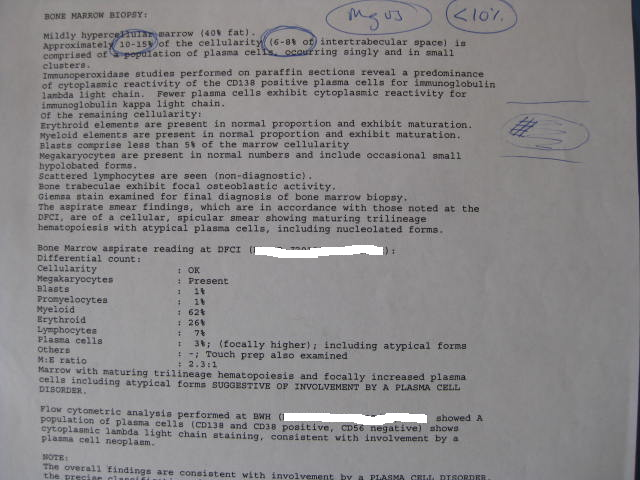 On the flow cytometry report he also circled where it says “plasma cell neoplasm.” 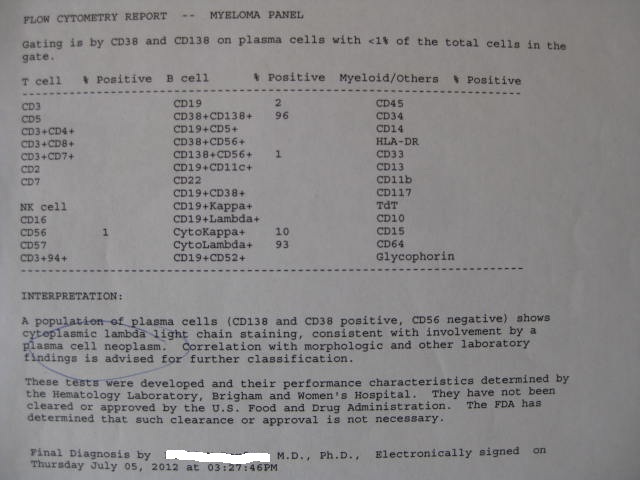 After circling the word “neoplasm”, Dr. R remarked, “Now Elizabeth. You might read this and think, ‘Christ alive! That’s cancer!’ but it’s not really.” He went on to explain it’s similar to being in the early stages of breast cancer. After he said that my eyes glazed over and I went to a very dark place. I don’t really remember one more thing he said during the rest of the appointment.

I have a different PA for my biopsy and aspiration on December 10 and I hope that I don’t have the same amount of leg pain during the procedure and after. I really wish my leg felt better from July! I wonder if the biopsy will be on the left side again or the right. Hmmm. That’s all I need – sciatic pain in BOTH legs.

I feel very prepared for my second biopsy now that I know what to expect. Although, I have to say, thinking that it was going to be just, “In…and out” worked last time! I am definitely glad that I didn’t know all that the procedure entailed. We’ll see how it goes on… MONDAY! One week from today!  Wooohoooooo.