I love, love, love this pram blanket and everyone who’s seen it whilst in progress have loved it too – well at least that’s what they’ve said and maybe the ones that didn’t love it just didn’t say anything!  Four friends at Armchair Yoga wanted to know where the pattern came from and two friends last night described it as striking.

Although I selected the yarn I didn’t as such pick the colours – if you know what I mean. No? Well, its for the impending grandson of a lady who works at the Royal and the pram that’s been bought for him is denim outside with the lining white, red, lime green and denim so she gave me the list of colours and I went and shopped for the actual shades.

Now I’m not going to even pretend that given the whole of the Sirdar Bonus DK colour range that I would have selected these four colours to go into one blanket but I’m truly in love with it – surprisingly smitten actually since although they went together okay when still on the balls it was only when combined in the pattern that I started feeling a growing affection but only after  I’d changed the colour order. 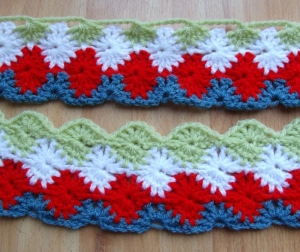 I initially started following the order the colours were written down in on the basis that if you were listing the colours on something you might note them down in the order you saw them (apparently they hadn’t done this anyway).   However the red and denim together just looked too heavy.  So I undid it back to the denim set up row and re-ordered it along the lines of light and dark which I think works much better.

Then there was the issue of the number of colours.  Did I work each strip separately ie, cut the yarn at the end of its current use or did I carry the yarns up the side.  I thought it would be easier to cut the colours, knot them and crochet the edging over it.

Then one of the Armchair Yoga ladies queried this as she wasn’t at all envious of all those ends to deal with and I explained that I didn’t want to spend ages un-tangling the four balls but since I had about a third to go I decided to give it a go.

I have to say the later was the better option.  Not only was it neater but it was way easier to edge over.  Fortunately I’d already decided to edge in denim but had I chosen the green or white I would have had to change my mind as the stronger colours would have peeked through. 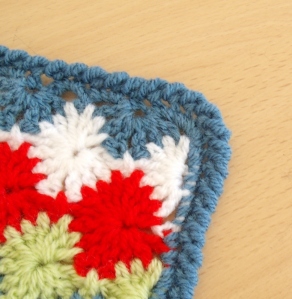 The edging was the single crochet (US double crochet) first round and a second round of sc (dc) worked backwards – it’s so simple and every time I’ve used it I’m always pleased with the result.

I’d done the six rows I didn’t like by Sunday morning and this was when I undid five of them and started again from the set-up row and I finished edging it today – which shows it’s quite an easy pattern that grows quickly.  Mind you it’s not like I’ve been doing tons of other stuff although if I hadn’t gone out for my tea yesterday I could have had it finished then.  (I didn’t go out with B by the way but two friends one of whom was a bit worried about me going as B told her I’d been sick yesterday – which I had but apparently the way B told her she thought I’d literally just up-chucked but it had been in the morning.  As it turned out I was fine and really enjoyed the food – I had stilton and garlic mushrooms and then lamb shank with mash and green beans- sometimes anti-sickness meds are just wonderful.)

Other creative spaces are here.