Don’t worry I’m not on a downer and thinking I’m going to pop my clogs. As you know I’ve had a quick stint in hospital with an infection in my line. The plan was that I would be having antibiotics all this week to make sure the infection was cleared prior to my STC. However; I called Edwina yesterday at Liverpool to inform of the infection and she thanked me for letting her know as it is the type of thing she needs to aware of. I thought at the time of telling her that maybe they would take it out and sure enough this morning at my appointment they told me that they also had spoken to Edwina and think it is best if they took it out.

So it was time to say goodbye to my Hickman line that I have had in for about seven months. Now I was really worried about it being taken out, but was expecting it to be done after the SCT. I know the last one I had taken out was only in for just over three weeks and had already started to graft in, so after seven months it would be well and truly stuck in. I asked how they would take it out and Laura said she would take it out here now. Using local anaesthetic I asked, no I will just take it it out. She could probably see the concern on my face. I was really worried about it hurting, I’m a bit of wimp when it comes to pain. The last time Laura said is shouldn’t hurt much was when I was first diagnosed with Myeloma and had my first bone marrow biopsy, that was the worst pain I have ever experienced! I reminder her of that.

Prior to Laura having a go at taking it out I had my last dose of antibiotics over twenty minutes in the line and then Laura got down to work. I asked if I could keep the line if she got it out, which she said I could but she would need to just cut the end off to see if there was any infection and for analysis, which I was ok with, the bit they cut off is the closest to the heart and as I had the extra loop in my neck as well, it would still be long enough to make some king of wall display out of, yes that was my plan to mount it on the wall with may a picture and explanation attached.

I asked Laura if she would need to make a cut of in it as she was going to just try and pull it including the colour that holds it in place, which is quite large. She said she would try and pull it out through the hole where the line comes out without making any cuts.

OK she said here goes, can you just take a death breath in, and out and in again. OK done …. err done … I didn’t feel a thing, nothing, nada zilch … All my faith is back with Laura again and I said I would buy her a cake. I honestly never felt a thing and it was out, I had nothing to worry about at all.

The colour unfortunately didn’t come out, but that isn’t a problem, she said it will just come to the surface in a week or two and drop out, she put a dressing on it and that was it.

She washed the line she had taken out and flushed it through, I also asked for syringe so I could give it a good was as well, which she did. 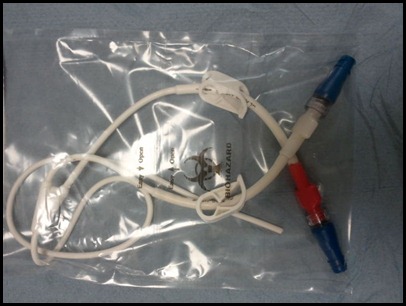 As I said I want to mount it and make a piece of art out of it with one of the pictures I have of me showing it in my chest.

I’m going to have another one put in again in a few weeks as I need it for my SCT. I’d rather they fit it in Chester and I will be put under general anaesthetic, so I won’t feel a thing this time. They don’t offer that at Liverpool they always do it while your awake, after having two of them fitted while being awake, I’d rather not do it again. Just knock me out and I wake up and it’s done.

I don’t have to go back to Chester again till next Wednesday for my bloods to be taken.

I started the new regime yesterday with the Lenalidomide and Dex and the usual drugs, about thirty tablets in a day as well as one daily injection again.

This work is licensed under a Creative Commons Attribution By license. My Life with Myeloma http://mylifewithmyeloma.blogspot.com Sean Tiernan