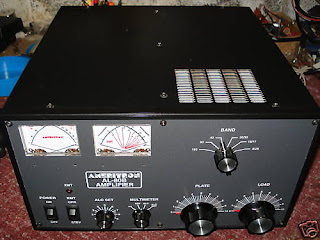 It’s been quite a while since my last post so thought I would bring it up to date. I have been mostly hanging out with my friends on 3.895 & 28.490 and also have been having a CW sked on 80 meters every Friday morning for a couple months now with W4CUX Bill down in the great state of Georgia. Also, I bought an Ameritron AL-80B 1000 watt amplifier back in February that I think is the best thing I’ve ever gotten as far as ham radio next to my 260 feet doublet antenna and Yaesu FT-1000MP Mark V rig. . I also absolutely love the Heil Proset Plus headset my XYL bought me for Christmas two years ago! I can hear everything so much better especially weak CW signals near the noise floor. The phase reversal on the headphones makes it sound like the audio is in the center of my head instead of at my ears. I highly recommend them! Have been having a lot of fun also on 30 meter PSK31 and also on 80, 40, & 20 meter Feld-Hell (Hellschreiber). Feld-Hell is a very old mode that Rudolph Hell invented in 1929 that was used a during the Spanish Civil War in 1933 and during WWII for field portable military communications. Check out the 30 Meter Digital Group and the Feld-Hell Club websites for more info on these fun digital modes. My favorite mode is and has always been CW and I joined a great group called the Straight Key Century Club (SKCC) back in 2006. SKCC is nearly 6000 members now and promote the use of straight keys and bugs, no electronic keying devices allowed for SKCC Awards. My SKCC number is 652. Give me a call if you hear me. I experimented with JT65A mode a while back, but find it isn’t my cup of tea. It more or less is just used for callsign and signal reports swaps with no conversation. I like to talk and also have a ragchew instead of just swapping reports. I’ll save the RST swapping for DX pileups and contests which reminds me the CQWW DX SSB Contest is coming up this coming weekend and the CW Contest November 28 & 29th. Well, that’s about it from here for now. Hope to hear you on the air or see you on the waterfall on digital.
Very 73 de Cliff KU4GW