Hello everyone, we haven’t stopped blogging we have been living life. We’re trying to get back to as normal of a life as possible. I still will keep everyone updated as things happen, tests are done and so on.

This month Mark has been doing tests like the bone biopsy, MRI’s and blood work to make sure he is staying in remission. This will happen every three months. He still will be going to the Huntsman for his treatments of valcade and Dex every week for a year, this is his maintenance. We seen Dr. Zangari yesterday (10-30-09)for his results and I am very happy to say Mark is still in remission and doing so well that some of the bone lesions are repairing themselves. This is rare but they are seeing more of it. He has been on a medicine that makes him grouchy, boy I am ready to run out the door some days. Doc changed it to a lighter dose we will see how that works. He also developed a rash that is called seborrheic dermatitis that he is being treated for on his face. Shhh its sensitive skin, but I didn’t tell you that.

Mark has gotten hair in the last six or so weeks! So much on is face he can’t shave fast enough. 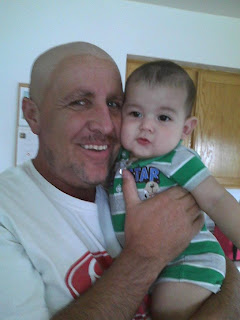 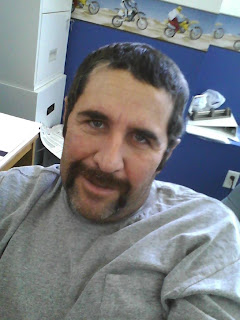 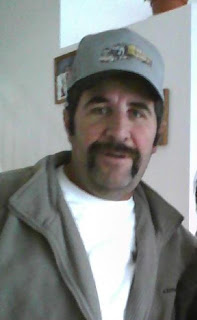 10-09 No they are not Halloween pictures

Now I just realized I have left Shane out of the blog for October. Shane went to Grandpa Ken’s for the deer hunt this year like every year. Joe and Shane went up on the mountain Saturday morning and hiked around looking for the big one. Afternoon came around and Joe had to go home. Shane asked Grandpa if he could take the four wheeler up to the ponds above their house to look for deer. Shane had only been up there a few minutes when he heard shots. Around the bushes came a rhino with a couple of people. They asked Shane if he was hunting, Shane said yes. These people told him to come with them down in the brush that there is another one with the one they just shot. Sure enough there it was, the guy kept telling Shane to shoot. Shane was not quit sure it was a buck, but the guy kept telling him to shoot. He did, he got it. They went down to get it and on the way Shane was calling Mark at Grandpa’s (yep that is how close they were to home, he had cell service) Mark is thinking how are we going to get this deer. Mark can’t lift and Ken just had knee surgery. Just then Travis and Brooke showed up at the door. Quickly they all headed up the road. The nice men that help Shane shoot the deer had already cleaned it for him and were heading off with their deer. So Shane got his first deer with the help of strangers. I would like to thank them for being so kind to my kid. Most people would not have even stopped. 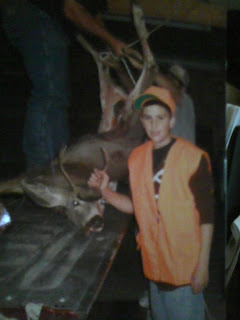 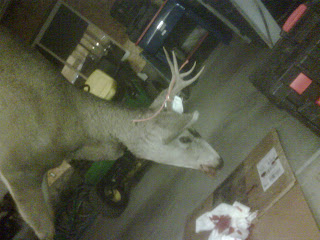