We’ve been waiting for reinfusion day for the last 4.5 weeks.

We began the morning with labwork followed by premeds – Benadryl, Ativan, and Tylenol. The transplant nurses let me watch while they prepared the two bags of stem cells for reinfusion.
The SCs arrived an an R2D2 like contraption. 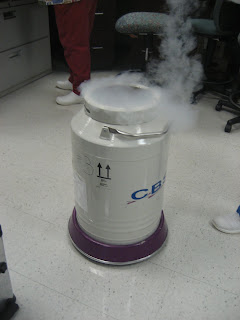 The bags then had to take a warm bath to thaw out. 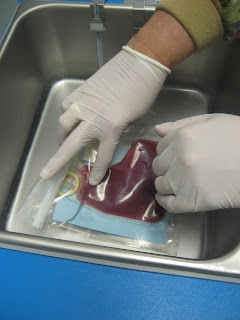 Each bag took about 10 minutes. Each bag was checked, double checked, and tripled checked to make sure they were her stem cells before they bags were hung. 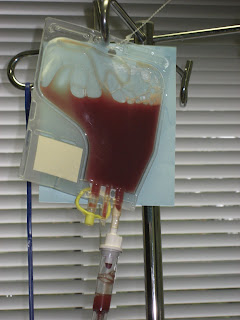 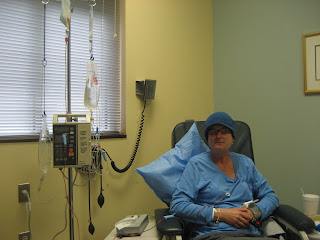 The transplant nurse monitored her temperature, BP, and heart rate during the entire process. Getting those babies back is alot less complicated than giving them up!
We’d read and heard that the preservative used to store the stem cells gives off a garlic like smell after reinfusion. It definitely smells like Olive Garden in our room tonight. Momma can’t smell it but I can. It’s only supposed to last 24 – 48 hours. It’s not nearly as bad as the time EJ ate an entire bulb of roasted garlic…so I can live with it.
Still on the DAB bag and she was also given a fluid bag for the night.
She doesn’t have much of an appetite and has been napping pretty much all afternoon. Today was a good day — a day that gives us hope for the future. On the other side of this, if she reaches CR, the garlic smell will all be worth it….

Side note — Michael McKean played on behalf of the International Multiple Myeloma Foundation on the Jeopardy Celebrity Invitational tonight. He won and $50,000 is being donated to IMF!!! AWESOME!!